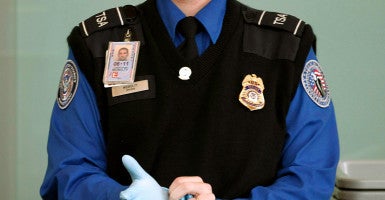 A new report from the Justice Department Office of the Inspector General found the Drug Enforcement Administration hired a TSA security screener as a confidential source. The screener was hired to notify the DEA of any bags with large sums of cash in them, which the DEA could then seize. (Photo: Jason Reed/Reuters/Newscom)

A new report from a government watchdog criticized the Drug Enforcement Administration for working with a Transportation Security Administration security screener to flag bags containing large sums of cash, which the drug agency could then take.

According to the investigation from the Department of Justice’s inspector general released earlier this month, the TSA agent was registered with the DEA as a paid confidential source.

The inspector general’s report said that the TSA security screener working with the DEA to identify luggage with large sums of cash was promised a reward based on the amount of money seized.

Though the TSA agent in question never provided the drug agency with any information, the screener “could have violated individuals’ protection against unreasonable searches and seizures if it led to a subsequent DEA enforcement action,” the government watchdog warned.

For experts on civil asset forfeiture, the findings from the inspector general underscore the “powerful” incentives law enforcement agents have to seize property and cash from people under civil forfeiture laws, even if they don’t charge them with a crime.

Those who back the laws, which includes many law enforcement agents and prosecutors, say civil forfeiture helps curb money laundering and drug trafficking.

“[The DEA is] putting a bounty on tips that lead to cash seizures, and that incentivizes, in this case, the TSA’s confidential information to do just that—to search any and all bags to get the cash they’re looking for to get the tip, and get paid,” Jason Snead, a policy analyst at The Heritage Foundation who studies civil forfeiture, told The Daily Signal. He continued:

There’s this area of [civil forfeiture] where you have these reduced protections against search and seizures that are being taken advantage of by the DEA.

Under little-known civil asset forfeiture laws, law enforcement agencies like the DEA have the power to seize cash and property if agents suspect it’s connected to a crime. Over the last year, numerous cases have arisen involving innocent Americans who had their property seized by the drug agency at transportation hubs.

In May, for example, DEA agents seized $16,000 from 22-year-old Joseph Rivers at a train stop in Albuquerque, N.M.

Rivers was traveling on Amtrak from Michigan to Los Angeles, where he had plans to pursue a career as a music producer. The $16,000, he told The Daily Signal in June, was the culmination of years of savings and money from his mother and other family members.

State and federal law enforcement seized the money before Clarke boarded a plane bound for Florida and alleged that it was tied to drugs. However, Clarke told The Daily Signal at the time that the money was the result of five years’ worth of saving from various jobs, financial aid, gifts from family members, and benefits his mother received.

Clarke is still fighting the government in court to get his money back.

Neither Rivers nor Clarke was charged with a crime. The DEA, in affidavits filed relating to the two cases, said their money was seized because the drug agency believed that the cash was tied to drugs.

Transportation facilities appear to be an area of focus for the DEA, and specifically its task force groups, which work to stop drug trafficking at transportation hubs using “cold consent encounters.”

“They have a concentrated area with lots of people going back and forth, and there’s just simply more opportunities per square mile to seize cash than anywhere else. In fact, one of the things we’ve seen in the roadside seizures or in the case of Joseph Rivers—one of the motivating factors for that is the fact that he was traveling to a known drug hot spot, which is any city in the U.S.,” Snead said. He continued:

If you’re at an airport and the flight happens to be going to Los Angeles or Miami, then right off the bat you’ve got the extenuating factor that they can put down in their official report.

Of those cash seizures, 21 percent were contested, and in 41 percent of those contested cases, all or part of the seized money was returned, totaling $8.3 million, the Justice Department inspector general found.

“People carry significant amounts of cash for innocent reasons and the laws are such that it’s easy to seize cash on the pretense it’s drug money,” Snead said. “There’s an allure that you can’t say no to.”

Local, state, and federal law enforcement agencies have faced mounting criticism because of their use of civil forfeiture to seize cash and property.

Those deciding to fight the government for their seized property must appear in court—often multiple times—to prove either that they didn’t consent to the criminal activity or that the property wasn’t connected to criminal activity, a notion that experts say flips the presumption of innocence on its head.

At the heart of the argument made by civil forfeiture opponents surrounding why civil forfeiture laws should be reformed, or abolished completely for some, lies what experts say is a perverse profit incentive the tool creates.

In many states and at the federal level, law enforcement agencies can keep up to 100 percent of the proceeds from civil forfeiture, a figure that gives agencies a financial incentive to seize cash and property.

This profit incentive, Snead said, speaks to why the DEA was willing to work with a TSA security screening agent to notify them of cash seizures.

“As the [inspector general] report noted, paying an official of the U.S. government to do this service violated the DEA’s own internal policy, and I think that alone speaks to the powerful incentives inherent to forfeiture,” Snead said. “It’s so powerful that DEA officers are willing at the very least to skirt the line, if not completely violate their own internal policies to secure cash forfeitures.”