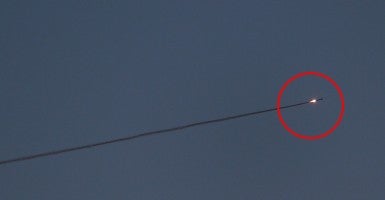 A rocket from an Israeli Iron Dome was launched to intercept a rocket form Gaza Strip toward Israeli cities on Aug. 20. (Photo: Newscom)

It’s been a rough few weeks for one of America’s most vociferous critics of missile defense.

For it to work, he claimed the system had to hit incoming Hamas-launched rockets “head on.” But he had photos, he said, of smoke entrails and what appeared to be the Iron Dome approaching the Hamas rockets from side angles or from behind. This “proved” the system didn’t work, even though the vast majority of his analysis was from the missile wars of 2012 and not the 2014 battles.

For 50 days from early July through most of August, Hamas launched nearly 4,500 rockets against Israel. Two Israelis died during that time because of rocket fire, but they were in an area not defended by Iron Dome batteries. None died in areas that were protected by Iron Dome, although in Askelon, 30 Israelis were wounded, some seriously, by Hamas rockets that the missile defense did not intercept. But overall, the Israeli government estimated Iron Dome successfully intercepted 90 percent of the Hamas rockets it engaged, compared to an 80 percent success rate achieved in the 2012 Gaza missile wars.

At first the arms control community greeted the Postol “analysis” with little skepticism. Most believe missile defense is a waste of money that will never work sufficiently anyway, and this report only confirmed their biases. Moreover, they’d long believed Israel’s estimate that Iron Dome worked 80 percent of the time in the 2012 missile wars was news too good to be true. As the weeks wore on and the rocket attacks from Gaza reached into the thousands with still no Israeli fatalities, the idea that Iron Dome didn’t work became more and more absurd to maintain.

At first, Postol claimed Israelis survived because their superior civil defense alerted them to run into bomb shelters in time. But what about the buildings that would’ve been struck while Iron Dome was failing 95 percent of the time? Certainly the buildings didn’t run inside shelters.

That puzzle was “solved” with another strange explanation: It must be that the warheads coming from Gaza didn’t work and simply didn’t explode. But in 2006, before Iron Dome, more than 50 Israelis lost their lives to the 1,600 bombs lobbed from Gaza which did explode.

The irony here is astounding. For nearly two decades, critics of missile defense and especially Postol, have assured us that Iran and North Korea, for example, were so ingenious they could build great decoys and other counter measures to fool any U.S. missile defense system. Which is why one Union of Concerned Scientist said in 2005 at a press conference announcing the group’s opposition to the deployment of American missile defenses in Alaska and California, “No U.S. missile defense is better than some missile defense”.

But Iran admitted, in fact bragged, about helping Hamas build its rocket arsenal—in 2006, 2012 and 2014. In other words, according to the professor, Iran can fool the best scientists America has in the missile defense business, but it cannot help Hamas build warheads in 2014 that, well, work. Even though they worked in 2006 and 2012.

Some arms control commentators, facing such overwhelming evidence that Iron Dome works, simply changed the subject. One wrote the technological breakthrough of Iron Dome—no matter how remarkable—did not excuse Israel for “keeping Palestinians in a cage” in the Gaza strip.

Others commented that it wasn’t that Iron Dome couldn’t protect Israel; it was that we don’t have a similar technology that could come close to protecting the continental United States or America’s allies.

Never addressed was the question of what happened to the 4,457 rockets Hamas launched at Israel. Did they go missing, or not explode? If they did not explode, why haven’t Israelis found the unexploded shells all over the country?

It’s beginning to look as if the Israelis were right about this. They carefully plotted all the intercepts, and they say of the rockets engaged, 90 percent were intercepted and destroyed.

And as for the claim about nose-to-nose contact, the Israelis say Iron Dome exploded “elegantly” or immediately in the vicinity of income Hamas rockets and blew them away. Further, missile defense experts have told me the pictures of entrails used were in all probability optical illusions that easily could fool non-experts.

In short, Israeli ingenuity not only trumped Hamas and Iranian rocket makers, it demonstrated in the 3 1/2 years it took to move from the laboratory to the real world that missile defense can work and its supporters in America are right to call for resuming work on protecting our homeland in this way.

Americans, like their Israeli friends, should call for Congress and the administration to boost America’s security with new missile defenses, especially additional sites in the eastern United States that could defend against not only long-range rockets from North Korea, China, Russia and Iran, but also shorter-range rockets launched off freighters from the maritime regions around the coastal United States.