Au Contraire, Mr. Secretary: ‘We Are at War’ With ISIS 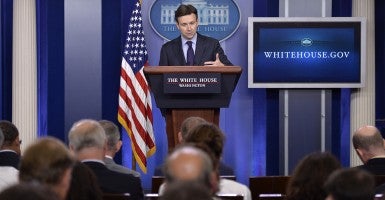 Standing in sharp contrast to Secretary of State John Kerry, White House and Pentagon officials today confirmed the United States is at war with the Islamic State, also known as ISIS and ISIL.

White House Press Secretary Josh Earnest told reporters during a briefing that the country is, in fact, “at war” with the brutal terrorist group.

The Defense Department’s spokesman, Rear Adm. John Kirby, echoed Earnest’s statements during a briefing at the Pentagon today, saying, “make no mistake — we know we are at war with ISIL in the same way we are at war and continue to be at war with al-Qaeda.”

However, in interviews with both CNN and CBS News yesterday, Kerry declined to characterize U.S. airstrikes and other military action against the Islamic State as a “war.”

What we are doing is engaging in a very significant counter-terrorism operation, and it’s going to go on for some period of time. If somebody wants to think about it as being at war with [ISIS] they can do so, but the fact is it is a major counterterrorism operation that will have many different moving parts.

Kerry’s comments came just one day after President Obama announced expanded airstrikes against the Islamic State in Iraq and asked Congress to authorize resources to train and equip rebels in Syria who are fighting both ISIS and the regime of Syrian President Bashar al-Assad.

The White House called on lawmakers to include $500 million in a funding measure to bolster the Syrian operation.

Since the heavily armed Islamist jihadists pushed well into Iraq from Syria — abducting, raping and slaughtering civilians — Obama has ordered more than 150 airstrikes to kill them and halt their advance.

Until now, however, administration officials shied from characterizing the actions as “war.”

The White House also  backed away from the phrase “global war on terror” in the early months of Obama’s presidency, and instead substituted “overseas contingency operations.”