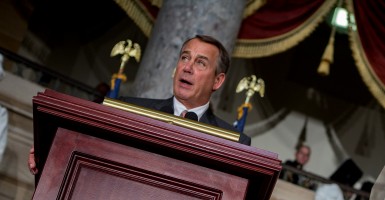 'It's important we give the president what he's asking for': House Speaker John Boehner. (Photo: Creative Commons)

House Speaker John Boehner yesterday reassured Americans that Syrian rebels — who could be the recipients of $500 million in U.S. aid — have been “well-vetted” by intelligence officials. Among skeptics, however, is a former top Pentagon official who urged that congressional leaders keep “eyes wide open” and not rush toward unintended results.

During his weekly press conference, Boehner announced his support for President Obama’s plan to “degrade and destroy” the Islamic State, the brutal terrorist group also known as ISIS or ISIL.

>>> This article has been expanded from its original form.

A major component of the president’s four-pronged plan is to train and equip the Free Syrian Army, described as a moderate group of rebels fighting both ISIS and the regime of Syrian President Bashar al-Assad.

Responding to a question about working with that rebel faction, Boehner told reporters it was time for the United States to offer its support.

“Based on all the information that I’ve looked at, the Free Syrian Army has, by and large, been very well vetted by our intelligence officials,” the Ohio Republican said, adding:

Steven Bucci, who oversees defense and foreign policy at The Heritage Foundation, said it’s difficult to know where the Free Syrian Army’s allegiances lie and “very optimistic” to assume the group has been, in Boehner’s words,  “well vetted.”

“They might not turn out to be as ‘moderate’ as they claim to be,” Bucci said. “Americans have been fooled before in this region.”

Equipping the Syrian rebels has “always carried a high chance of failure,” Joshua Landis, director of the Center for Middle East Studies at the University of Oklahoma, told The New Republic:

There are 1,500 militias in Syria that they’re trying to herd like cats. The rebels often fight among each other and most are extremely regional and clan or village based. Now, if you give them money and say we’re going to bomb ISIS, then you take over, you have militia chaos. You have Libya. You don’t have a state.

Aron Lund, editor of the blog Syria in Crisis for the Carnegie Endowment for International Peace, told The New York Times that it is likely the United States would find the so-called moderate rebels to be a “diverse group” laden with infighting:

You are not going to find this neat, clean, secular rebel group that respects human rights and that is waiting and ready, because they don’t exist. It is a very dirty war, and you have to deal with what is on offer.

Such assessments may give lawmakers pause as the White House asks Congress for $500 million to train and equip the Syrian rebels — an amount that would be added to a continuing resolution to fund the government.

Boehner said lawmakers have not reached an agreement on whether the money would be included in that funding bill.

>>> What Obama Got Right and Wrong in His ISIS Speech

And Rep. Adam Schiff, D-Calif., said colleagues have doubts about it.

“There’s a lot of skepticism about this piece of the president’s strategy,” Schiff  told The New York Times. “The so-called moderate rebels have often been very immoderate and ineffective.”

The continuing resolution to keep the government running beyond the end of the fiscal year Sept. 30  was supposed to be brought before the House this week. A vote was postponed as lawmakers weigh the president’s request for the Syrian rebels.

We only have one commander in chief. He laid out his plan. I would never tell the enemy what I was willing to do, or unwilling to do. But he is the commander in chief. He made that decision. At this point in time, it’s important that we give the president what he’s asking for. And we got to keep our eye on the ball. The issue here is about defeating a terrorist threat that is real and imminent.

Allocating such funding through the continuing resolution, however, could have unintended consequences, Bucci told The Daily Signal.

Bucci, a top official at the Pentagon during the Bush administration, said the Syrian rebels could turn training supplied by the United States against the country, or help Assad inadvertently.

>>> The Scary Amount of Oil Money ISIS Makes Every Day

They might be completely honest, but then lose to ISIS or al Nursa, the al-Qaeda affiliate in Syria, and then the radicals have all our well-intentioned aid. Bottom line is that our leaders need to make this call to aid the Free Syrian Army with their eyes wide open, and not as glibly as Obama portrayed in his speech.

Bucci, who saw service as an Army Special Forces officer, also warned that attaching the president’s requested $500 million for the rebels to the continuing resolution could “muddy the waters” of the vote to fund the government.

Lawmakers could choose instead to authorize aid to Syrian fighters as a stand-alone provision.

“As the representatives of the American people, the Congress ought to be able to show their support or principled opposition for military action without hiding it in the CR,” Bucci said. “There are questions yet to be answered, and a clean debate should provide them. It is the right — and the smart — thing to do.”