The Anti-Big Labor Trend the Media Is Missing 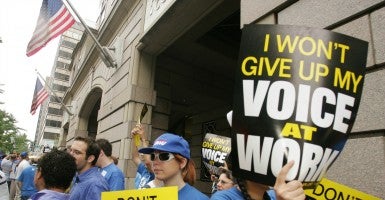 Last month Wisconsin made national headlines by becoming the 25th right-to-work state. But there’s another equally significant development in workers’ rights that has largely escaped media attention: the rapid flowering of local right-to-work laws in Kentucky.

As of December 1, 2014, no local governments anywhere in the U.S. prohibited forced union dues. Now a dozen Kentucky counties do so. If the courts uphold these laws’ validity, it could mean historic advances for worker freedom.

Right-to-work’s prospects appeared bleak in Kentucky after the midterm elections. A majority of the state senate supported workplace freedom legislation, but proponents had failed to pick up enough seats to move it through the state House. It seemed no progress would occur for at least two years.

However, as my colleague Andrew Kloster and I pointed out last year, this legal argument flouts two Supreme Court precedents. First, the Congressional Record shows—and the Supreme Court has recognized—that Congress passed 14(b) to disclaim federal regulation of right-to-work. If Congress has not prohibited it, local governments can act.

Secondly, the Supreme Court usually interprets the word “state” in federal statutes to include both state and local governments. The Court does so because localities only have powers that their legislature grants them. So the Supreme Court requires that, “absent a clear statement to the contrary, Congress’ reference to the ‘regulatory authority of the State’ [the statutory language at issue] should be read to preserve, not preempt, the traditional prerogative of the States to delegate their authority to their constituent parts.”

No such “clear statement” exists in the National Labor Relations Act. Consequently local governments have a good legal case for having the authority to pass local right-to-work laws.

After Warren County passed its ordinance, two things happened: They saw a surge in interest from new businesses, and other counties began following suit.

Now a dozen counties in Kentucky—including 3 of the 10 largest in the state—allow workers to choose for themselves whether to pay union dues. Local laws now protect half a million Kentuckians from forced union dues.

Unions have filed suit in federal district court. Hardin County (the county the unions sued) just filed their motion for summary judgment. Final arguments are due in to the court in early May; the judge will rule sometime thereafter.

If the courts uphold local ordinances, it will be a game-changer in the workplace freedom debate. In states such as Ohio, Pennsylvania and Illinois, right-to-work has lacked the support to pass the legislature.

Local right-to-work would shatter the gridlock that has only seen four states move to protect worker freedom in the past 25 years. Instead, localities could bypass union opposition and protect their residents from union coercion.

The media has not paid much attention to this development, but they should.