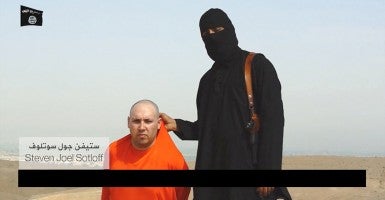 A screenshot of journalist Steven Sotloff in the video of the execution of James Foley.

A video of the execution was made public by jihadist monitoring organization SITE Intel Group. ISIS also threatened the execution of British hostage David Cawthorne Haines, sending a tweet today that read:

James Carafano, vice president of foreign and defense policy studies at The Heritage Foundation, called the Sotloff beheading “despicable and beyond the pale.”

He told The Daily Signal:

ISIS has committed countless atrocities since the invasion of Iraq began. Every one of them, including this act, is despicable and beyond the pale.

Carafano added, “The president was wrong to characterize this as a humanitarian mission — this is a war against a regime every bit as brutal as any that has ever appeared on the face of the earth.”

Sotloff, a freelance journalist who worked for Time magazine and other publications and also spoke fluent Arabic, was abducted a year ago in Syria. Last week, his mother sent a message to the leader of the Islamic State, Abu Bakr al-Baghdadi, asking him to “please release my child.”

We take this opportunity to warn those governments that enter this evil alliance of America against the Islamic State to back off and leave our people alone.

Carafano said this will not be the last atrocity committed by ISIS against America and its allies. He told The Daily Signal:

In this part of the world honor is power, and ISIS will do everything possible to show it can strike back even as it loses ground. There already has been an uptick of terrorist attacks in Baghdad and other key cities.

Carafano warned that “time is not on our side” in the war against the Islamic State and said the best way to bring justice, peace and security to the region is to help the Iraqi people take back their country as quickly as possible.

U.S officials have not yet confirmed the authenticity of the video. Sotloff’s family has been made aware of the situation and is requesting time to grieve.