8 Things You Should Know About New Presidential Candidate Jeb Bush 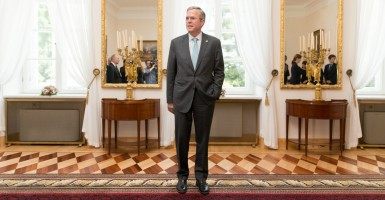 Jeb Bush officially announced his presidential campaign on Monday, six months after he said he was “actively exploring” the candidacy. He will join the pool of ten other Republicans seeking to win the White House in 2016. Here are eight things you may not already know about the newest GOP contender.

1. If elected, Bush would make history as the first president fluent in Spanish. He has already used the skill in his campaign, distinguishing himself from his GOP competitors as the only Anglo candidate to run presidential ads in both Spanish and English.

2. He has immersed himself so deeply in the Latino community many view him as part of it. In March, Univision called Bush a “Hispanic candidate” and, according to NPR, newspapers in Miami began referring to him as “one of the most prominent members of the Hispanic community” in the mid-1980s.

3. Jeb’s fellow Floridian presidential hopeful Marco Rubio views him as a mentor. Ten years ago, Rubio told a journalist of Bush: “He’s practically Cuban, just taller. He speaks Spanish better than most of us.”

4. Even Bush once thought of himself as Hispanic, mislabeling himself as such on a 2009 voter-registration application.

5. He has used his upbeat and simple “Jeb!” campaign logo for more than two decades, winning two gubernatorial elections in Florida—the only Republican ever to do so.

Jeb! has used the same logo since 1994. pic.twitter.com/QGsbWGr7Ot

6. Despite endless comparison, Jeb and older brother George W. Bush are not especially close. Seven years apart, George is described as more personable and broadly focused while Jeb is a more reclusive policy wonk focused on details. George alluded to the their distant relationship earlier this year, telling associates if Jeb were to run for president, “I may be the last one to know,” The New York Times reported.

7. In 2006, Jeb was asked to be the NFL commissioner, but turned the job down to finish his term as governor. Jeb recently told Politico he only considered the offer for “about 10 minutes.”

8. Republicans have not won a presidential election without a Bush on the ballot since 1972. If Jeb were elected, he would extend the 42-year streak for another four.