Q&A: Should the U.S. Bomb ISIS Targets in Syria? 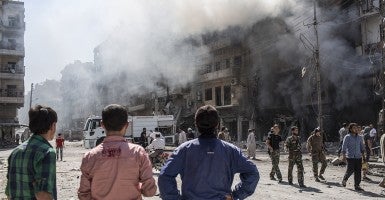 1. Should the U.S. bomb ISIS targets in Syria?

It depends. Never take the decision to put U.S. troops in harm’s way lightly. First, there ought to be clear U.S .vital interest at stake. America has an interest in seeing ISIS driven out of Iraq. Attacking targets in Syria only make sense if they would be materially contribute to that end. Simply bombing targets alone rarely proves decisive in military operations. Striking targets has to be paired with other activities to take advantage of the effects of an attack. Military operations must also be proportional: they must have a suitable military purpose and take due care to minimize the danger to innocents on the battlefield.  All these issues have to be adequately addressed in order to determine whether attacking ISIS targets in Syria is a suitable, feasible and acceptable course of action.

The administration will have to state the legal basis for any action. ISIS is a trans-national terrorist organization whose leadership was formerly aligned with and part of al-Qaeda. By engaging military action against U.S. persons and allies, and by announcing its intention to continue to attack the United States, our personnel, interests and allies, ISIS is a lawful target for U.S. military action. The administration may rely on the 2001 Authorization of Military Force (AUMF), the president’s Art II powers given in the U.S. Constitution, or both, or it may decide to seek additional authority from Congress.

3. Should the president consult Congress before extending combat operations into Syria?

Yes. It would be prudent for President Obama to seek a resolution from Congress before acting. This initiative would demonstrate that the president was acting with the strong support of the nation through the voice of its elected representatives—and that the president had explained the purpose and scope of the mission.

4. Should the administration work with the Syrian, Iranian and Russian governments to defeat ISIS in Syria?

No.  The Assad regime is despicable and as grave a threat to the people of Syria and peace and security in the region as ISIS. The Iranian government for its part has been designated a state sponsor of terrorism and has one of the world’s worst human rights records. Iran foreign policy has fomented sectarian conflict throughout the Middle East. Russia has been an unrelenting support of both the Iranian and Syrian regimes perpetuating the civil war and propping-up Syria’s Bashar al-Assad’s efforts to cling to power.

Yes. If the U.S. makes a concerted effort to work with other countries to shut down the pipeline funneling “foreign fighters” and support into Iraq, adequately supports a counteroffensive by Iraqi security forces to take back their country and works with the Iraqi government and friendly and allied nations to overcome the sectarian divide that has crippled the Iraqi political leadership, the Iraqi people have every prospect of winning back their country and their future.