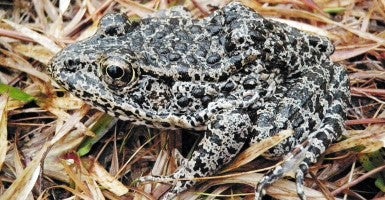 The U.S. Fish and Wildlife Service (USFWS) is seeking to protect the dusky gopher frog on the Endangered Species List by designating over 1,500 acres of private property in St. Tammany Parish, Louisiana as a “critical habitat” for the embattled amphibian.

But here’s the kicker: The frog hasn’t been seen on the land in question for over 50 years.

The federal government has the ability through the Endangered Species Act (ESA) to designate land as “critical habitat” subjecting it to additional regulations. But the government can’t simply claim that private property is “critical habitat” without first conducting an economic analysis to determine the economic impact. If the analysis shows that the cost of creating a critical habitat burdens the property owner and outweighs the perceived benefit to the endangered species, the land can be exempted from the regulation.

In the case of the St. Tammany property, the economic analysis produced by the USFWS revealed that the “designation could preclude all development on the land, causing the landowners to lose as much as $36 million.” Meanwhile, the land is not actively benefitting a single dusky gopher frog. But the plans to make the land a critical habitat proceed. This is a federal land grab at its worst. And, unfortunately, the courts are complicit.

Oral arguments were heard in a U.S. district court last week regarding the situation. U.S. Department of Justice attorney Mary Hollingsworth noted that the property in dispute is a good prospective breeding ground for the frog and is “in very good shape and could be used today if the frogs were there.”

But, as noted earlier, the intriguing thing is that the frogs aren’t there – and they haven’t been seen there or anywhere in Louisiana for 50 years. Moreover, calling the land suitable for the frog is debatable at best. Pacific Legal Foundation lawyer M. Reed Hopper noted that “this land does not include the physical and biological features that are critical for the dusky gopher frog, so it’s no surprise that there aren’t any frogs on the property.” The government wants to effectively restrict use of private land that could cost the landowners millions to protect a creature that doesn’t live, and possibly could not even survive, there.

Unfortunately, the court’s decision allows this inanity to proceed. Pacific Legal Foundation reported that a federal judge “reluctantly” upheld the designation of this unsuitable area as “critical habitat.” The judge acknowledged the ESA appears to go too far but suggested that is a matter for Congress to address and not the courts.” The Foundation called the action by the USFWS to not follow its own rules an “irrational decision.”

An “irrational decision” is a good way to put it. Moreover, it’s outrageous that the government could restrict development of private property and cost a family $36 million dollars, not to mention the cost in jobs and economic activity of not productively using the land. And the deeper issue of excessive government intervention shouldn’t be forgotten. M. Reed Hopper says it well:

“Essentially this is sort of a test case for the Fish & Wildlife Service. This is the first time they’ve ever extended their authority this far, and if they get away with it here, they’re likely to do it in the future.”

Though the frog may be little, through the Endangered Species Act, this amphibian is trashing private property rights that should be protected under the Constitution, potentially costing people millions, and setting a dangerous precedent for the future.