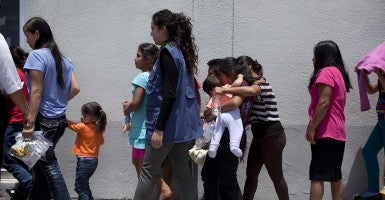 The television screen captures a boy with a buzz cut swiveling in a chair at a table in an otherwise empty white room inside a detention center in an isolated New Mexico desert town.

The 7-year-old, Anthony Damian Ramos Sanchez, sits next to his mother, Jessica Ramos Sanchez, who initiated their journey from El Salvador to America because she feared her son would be killed for not enlisting in a gang.

That act landed them in the Artesia Family Residential Center in Artesia, N.M.

Here on the other side of the screen, in an otherwise empty courtroom in Arlington, Va., a federal immigration judge and a lawyer representing the U.S. Department of Homeland Security question Sanchez — through a translator — about why she and her son illegally entered the United States.

On the phone, dialed into the proceedings from his office in San Antonio, Texas, is Sanchez’s lawyer.

Together — but separated by thousands of miles — the actors in this scene participate in the mother and child’s “master hearing,” their first immigration hearing, that will begin to determine the family’s fate. The Daily Signal sat in on this Aug. 20 hearing at Arlington Immigration Court.

Because of a shortage of immigration judges for women and children staying at the Artesia family detention center, U.S. officials set up a system by which faraway judges hear asylum cases by video-teleconference and asylum officers interview migrants to make initial assessments of their claims.

Civil rights groups and immigration lawyers call the temporary center, which houses about 600 women and their children who recently arrived illegally, a  “deportation mill.”

Civil rights groups filed a federal lawsuit Friday against DHS, alleging the government violated due process rights of women and children at the center, creating a system that discourages migrants from applying for asylum and encourages deportation.

The Los Angeles Times reported that nearly 300 Central American women and children have been deported from family detention centers — including the Artesia facility and another center in Karnes City, Texas — that opened in response to the border crisis.

In trying to deter future illegal border crossings, the Obama administration has prioritized deporting women with children because they are not entitled to the same protections as unaccompanied minors from Central America.

DHS officials say that volunteer lawyers are always available at no charge to migrants in Artesia through a sign-up system established in the center.

A spokeswoman for DHS told the New York Times that the administration’s response to the border surge had been “both humane and lawful.”

Seeing a Day in Court

At Arlington Immigration Court this day, The Daily Signal witnesses three master hearings — carried on through a video conference — for women and children living at the Artesia center.

Owens begins the day with the case of Sanchez, an El Salvador citizen, and 7-year-old Anthony.

The mother, visible on the monitor, is emotionless and business-like, wearing her dark hair in a bun.

Anthony is fidgety, switching off between smiling at the camera, stretching his arm into a bicep curl and laying his head on the table. At one point, the boy leaves his chair and wanders away.

This is the second appearance before the court for Sanchez and her child. The first hearing was continued to allow time for their lawyer, Fernando Gireud, to prepare.

Gireud concedes the charges against his clients, who received a notice to appear (NTA) July 23 after entering the U.S. illegally by raft through the Rio Grande Valley.

The lawyer says he will need two to three weeks to file the asylum application, so Owens gives the migrants a new court date, Sept. 15. That day, they will see each other again and Gireud will present the formal asylum package.

Owens will not rule on asylum at the September hearing, however.

Finality will have to wait until the migrants’ individual hearing, at an undetermined future date.

‘Gangs Want to Recruit My Boy’

After Owens schedules the next court date, Gireud tells the judge that his clients seek $5,000 bond to leave the Artesia facility while their case plays out.

Jessica Sanchez theoretically could afford bail because her aunt lives in America, working under temporary protected status. Other family members reside in the country too, she says, including her father, uncle, grandmother and sister.

Sanchez says she paid smugglers 100 pesos a piece, for herself and her son, to get to the U.S.

The woman does not present a flight risk, her attorney argues, because she has no criminal history.

She knows that if, upon being granted bail, she doesn’t show up to her next hearing, she would risk being deported, Gireud says. And she “understands the responsibility for caring for her son.”

The government lawyer, representing the Department of Homeland Security, begins a lengthy questioning of Sanchez (see transcript in sidebar below). Her answers are translated from Spanish to English by an interpreter in the Arlington courtroom.

Sanchez shares why she traveled to America.

“The truth is, me myself, I don’t feel protected by the police against the gangs,” Sanchez says, through the interpreter.

Sanchez says she came to America because, “I don’t feel protected by the police against gangs.”

Trying to find holes in her story, the DHS lawyer refers to a report from Border Patrol agents who took her into custody. Sanchez told the Border Patrol that she came seeking employment.

“Do you remember [saying] that?” the DHS lawyer asks.

“Yes,” Sanchez says. “But I also fled because gangs want to recruit my boy.”

‘You Feared You Would Be Murdered?’

Sanchez also is asked why she didn’t report the gang threats back home.

Sanchez says she thought that if she didn’t deliver Anthony, the criminals would murder her and the boy.

After the DHS lawyer finishes her questioning, Owens begins his own, sometimes asking the same things, sometimes having Sanchez expand on her answers.

“What did the gang actually say to you?” the judge asks.

“If the gangs wanted to recruit him, why would they kill him?” he prods, referring to Anthony.

Owens also gets hung up on what Sanchez actually said to Border Patrol agents.

“You told them you feared you would be murdered?” Owens asks.

“But you also told them you were coming to work?”

“Yes. I told them both things.”

The lawyer says she opposes bond because Sanchez and Anthony, though not a risk to the community themselves, represent a broader trend of “mass migration” that required the government to divert resources to the Rio Grande Valley. That left holes elsewhere.

Also, the DHS lawyer argues, Sanchez didn’t present herself — or give herself up — to Border Patrol agents. Rather, agents apprehended Sanchez and her son after finding them.

The DHS lawyer says the asylum claim “may be somewhat tenuous,” because the migrants do not belong to a specific a social group that is persecuted.

The DHS lawyer says the asylum claim “may be somewhat tenuous.”

‘One of the Lucky Cases’

Aleksandra Michailov, a Washington-based lawyer who belongs to the American Immigration Lawyers Association, says the back-and-forth nature of the Sanchez hearing seems fair and typical.

But in an interview with The Daily Signal, Michailov, who does not represent families at Artesia, says the fact that the Sanchez case actually made court makes it “one of the few lucky cases.”

Before the case reaches court, she says, women and children at Artesia must pass a “credible fear” test given by an on-site officer with Immigration and Customs Enforcement, or ICE.

“Immigration attorneys do not feel like due process is being followed during the credible fear interview,” Michailov says. “The women and children do not get to prepare or be represented by an attorney. The approach by ICE officers is hostile. If they fail the credible fear test, they are deported.”

“If they fail the credible fear test, they are deported,” says a D.C.-based lawyer.

Michailov acknowledges that after that interview, if the migrant passes and the case proceeds to court,  “the system is picking up as it should be.”

Owens does not deliberate further before delivering a bond ruling, saying of Sanchez:

The court must respect the fact that her arrival is part of an illegal surge which has substantially adversely affected the allocation of resources. Granting bail encourages more migration and undermines the national security of the country.

Nonetheless, she has the right to be free of detention. The court will set bail at $20,000.

With that, Owens adjourns the hearing and begins another one, Gireud says goodbye and hangs up the phone.

And, unless she can come up with the money,  Sanchez and her son will remain in confinement, awaiting their next hearing — getting due process.