Are Public Schools Collecting Too Much Data on Your Kids? 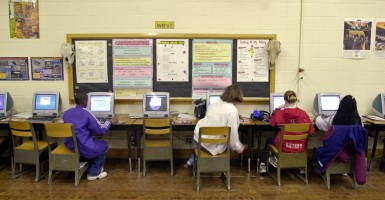 Parents are increasingly voicing concern that public schools are collecting massive amounts of personal data on students, storing it and distributing it to third parties without their consent.

Dawn Sweeney, a Pennsylvania mother, has two children in public schools and home-schools her younger three. She had planned to enroll them in public schools when they reached seventh grade, as she did with her two oldest. But because of the data collection, she’s now reconsidering.

That data collection makes plenty of parents nervous and is one reason more parents home-school their children, said Will Estrada, staff attorney and director of federal relations for Home School Legal Defense Association.

Emmett McGroarty, executive director of the Preserve Innocence Project at the American Principles Project, said if government is able to collect information in an unfettered manner on individuals, it will change their relationship.

“If you’re walking around knowing this guy is collecting this information and is keeping it on you and your children, it’s going to bother you, and it’s going to intimidate you,” he said. “If you and I ever enter into a dispute down the road, you’re really going to be at a disadvantage.”

In late July, parents who had worked to take down inBloom, a pilot project involving massive student data collection, formed Student Privacy Matters, a coalition to push for better privacy protections at the state and federal level.