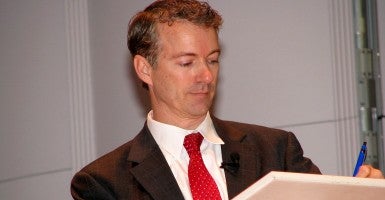 On Thursday, forfeiture-reform advocates gained a new ally when Sen. Rand Paul, R-Ky., announced his “Fifth Amendment Integrity Restoration Act” or “FAIR Act,” which takes direct aim at some of the most abuse-prone provisions of federal civil forfeiture law.

Federal civil forfeiture laws allow police to seize money and property if they suspect it is being used in or is the result of crime. In most states, the money is directed back to the law enforcement agency that seized it. Officers’ salaries sometimes depend on this money, and the result is a perverse incentive to seize property, especially cash, in often dubious circumstances.

State and local governments can try to curb this behavior by setting restrictions on agencies’ forfeiture hauls or heightening their evidentiary burdens in court. But in a practice called “equitable sharing,” law enforcement can hand over forfeitures to the federal government in exchange for 80 percent of the proceeds, which encourages circumvention of state law. In 2012 alone, the feds disbursed $657 million in equitable sharing payments.

To prevent this, Paul’s legislation would remove the authority of the Justice Department to make equitable sharing payments altogether. It also would require all seized funds be deposited in the General Fund of the Treasury, rather than returned as trophy payments to law enforcement. Finally, it requires the government to provide “clear and convincing evidence” the assets are subject to forfeiture before seizing them. This raises the evidentiary burden to one step below the “beyond a reasonable doubt standard” that applies in criminal courts.

Paul is not alone in advocating reform. Rep. Tim Walberg, R-Mich., took to the floor of the House last month in opposition to continued abuses. Minnesota recently enacted sweeping reforms, and other states are moving towards adopting reforms of their own. These reforms cannot come at a better time.

Just this week, the extent to which law enforcement will go to ensure victories (and profits) in civil forfeiture suits was laid bare in Baltimore. A $122,640 cash haul, recovered from checked luggage at Baltimore-Washington International Airport, was seized on suspicion that it was drug money. Falco, a drug dog, was brought in to examine the currency and alerted to narcotics (an unsurprising fact given that as much as 90 percent of currency in circulation is laced with illegal drugs).

For dog alerts to be considered valid, both dog and handler must go through precise training verified with a certification. But in the Baltimore case, it seems a TSA officer was told to fabricate Falco’s certification, and that forged document was then passed off as evidence in court bolstering the government’s case. Particularly alarming is the possibility that officials right up to the U.S. Attorney’s Office handling the case knew about the forgery, and proceeded anyway.

If winning a lucrative forfeiture case is temptation enough for law enforcement personnel to falsify evidence, then clearly the time has come for reform. Many of the proposals in Paul’s bill are welcome. Congress now has the opportunity to get cops out of the money-making business and to protect the property rights of the American people. Will it step up to the plate?

The Heritage Foundation will hold a panel discussion on civil asset forfeiture with Rep. Walberg, Washington Post reporter Radley Balko, and the Institute for Justice’s Scott Bullock on Tuesday, July 29, at noon. Join us or watch online.