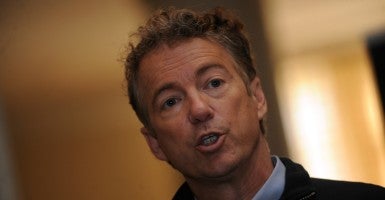 According to the report titled, “Rising Tide of Waste in the Philippines,” “the United States Agency for International Development (USAID) plans to invest as much as $24.7 million as part of the ‘Climate Ready’ project to help the Philippines adapt to rising sea levels and extreme weather caused by climate change.”

The Waste Report, released Monday by Paul, chairman of the Subcommittee on Federal Spending Oversight and Emergency Management, “is an ongoing project cataloguing egregious examples of waste within the U.S. government,” according to a press release from Paul’s office.

USAID will fund approximately 12 Climate Ready projects, each ranging up to $2 million, according to the press release.

“USAID’s solicitation is an RFP (Request for Proposals) for cost-plus contracts,” the Monday press release from Paul’s office says. “RFP’s are used at all levels of government to solicit detailed plans of how to achieve stated objectives and working within established constraints.”

In response to Paul’s report, Curtis Kalin, spokesman for Citizens Against Government Waste, told The Daily Signal in an email:

Sen. Paul’s report clearly illustrates everything that’s wrong with the grant process. Taxpayer dollars are allocated for a purpose that’s not in America’s direct national interest, and then the project has zero parameters or safeguards built in to prevent public funds from being frivolously wasted on projects that may or may not even accomplish the original goal. Taxpayers’ money should only be spent on critical national priorities and must include several layers of oversight requiring specific details on how and where the money will be used.

The report compares the Philippines Climate Ready project to another federally-funded project.

A video game created for high school students that “focused on the impact of Florida communities of sea-level rise” was meant to motivate an age group “not particularly motivated to act” on behalf of climate issues.

USAID’s plan does not put forth any guidelines for these project proposals, the report says that “in other words, submit any idea to prepare the Philippines for climate change, and if it is accepted, that idea will be the standard we hold that idea to.”

David Kreutzer, a senior research fellow for energy economics and climate change at The Heritage Foundation, told The Daily Signal in an email that because USAID’s proposals are extremely “vague,” it is hard to tell exactly what its Climate Ready project really entails.

“However, we can be pretty sure they won’t be projects to tell the people of the Philippines the truth about our climate policies,” Kreutzer said. “That truth is: The U.S. and the IPCC [Intergovernmental Panel on Climate Change] created a climate agenda that will extend energy poverty for the developing world.”