Only Russia Can Make Peace With Ukraine 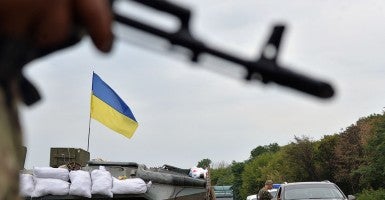 Ukrainian servicemen check a driver's documents as they man a check-point on a road near the eastern Ukrainian city of Slavyansk. (Photo: Newscom)

Yesterday, hundreds of innocents from all over the world lost their lives in the skies over Ukraine.  This horrible tragedy is a clear reminder of how very far from peace this part of the world remains.

Only one capital can end the needless conflict. It’s not Washington. It’s Moscow.

Before the downing of flight MH-17, many in DC had relegated the ongoing struggle in Ukraine to second-tier status among the growing ranks of global hot spots. Washington’s attention had pivoted to places like Iraq, Israel and Texas.

Some who still followed the long game in Ukraine had even begun talking up long-term solutions to the conflict between Kiev and the Kremlin. One frequently mentioned model for ameliorating the situation was the Austrian State Treaty of 1955.

After World War II, the US, France, Britain and the Soviet Union occupied Austria. Ending the occupation took 10 years of what often seemed unending and intractable negotiations. Over that decade of diplomacy, war-torn Austria knew little peace. The Soviets routinely kidnapped people they didn’t like. They underwrote a labor uprising in an attempt to topple the government.

Sometimes they traded shots with Americans. And everybody spied on everybody.

Still, Austria managed to make remarkable progress over the course of the occupation. It established a stable, multi-party, democratic political system. With the aid of Marshall Plan, Austrians jump-started their economy. And with the covert assistance of the Americans, the government established a nascent military force capable of providing domestic security.

Then abruptly in 1955, Moscow decided it wanted a deal. The key to the settlement was an agreement that Austria would become a neutral state opting to join neither the West nor the Eastern bloc.

Both sides respected the deal. The occupying armies left. Austria became a nice and neutral state.

But hopes of repeating the Austrian scenario in Ukraine are far-fetched. The situations are quite different.

Austria may have had its tense moments, but compared to the crisis wrought when Russia wrested Crimea from Ukraine, Cold War Austria looks like Disney world.

Further, Kyiv has an independent government that can’t be dictated to by occupying powers.

Austria also had stable political, economic and security conditions before the deal was done in ‘55. In 2014 Ukraine, stable is where people keep their horses.

Finally, Moscow pretty much gave up meddling in Austria.

None of the prerequisites for peace are present in Ukraine.

The one power most capable of making the situation better is Russia. Putin could shut off and shut down the separatists. He could stop trying to undermine the political process. He could allow the Ukrainian economy to recover. He could stop using Ukraine as a pawn in his tip-for-tat power struggle with the West.

If Putin undertook all of these initiatives today, Ukraine could start treading the path taken by post-war Austria.

On the other hand, if there is just more war and less peace. If the skies of Ukraine remain no longer safe, then the world knows who to blame.