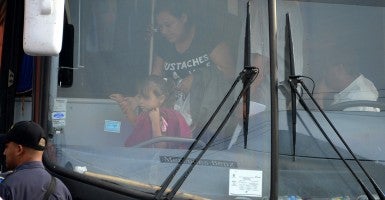 'The tight conditions at the ad hoc holding areas and camps that have been thrown together to address the flood of young illegals now assaulting the border are literal breeding grounds for any number of communicable diseases.' (Photo: Orlando Sierra/Getty Images/Newscom)

For over a century, immigrants coming to America had to show that they were healthy before they were allowed to stay. The present disaster at the southern border is now bringing to light another aspect of sensible immigration that the Obama administration is ignoring.

The tight conditions at the ad hoc holding areas and camps that have been thrown together to address the flood of young illegal aliens now assaulting the border are literal breeding grounds for any number of communicable diseases.

>>> Obama Seeks $3.7B to Meet Surge of Kids Crossing Border

There have already been reports of cases of H1N1 flu virus in the camps. This is clearly one of the biggest threats given the highly contagious nature of H1N1, but there are others. The young age of many of the people in the camps also raise the specter of any number of childhood diseases (tuberculosis, polio, measles, etc.) for which few will have been vaccinated under programs similar to the way young people are in the U.S. The combination of so many possible carriers of such maladies, kept in crowded conditions, is a major public health disaster in the making.

Even if the dangers of spreading germs in the camps can be avoided, the expeditious manner that is being used to move some of the illegal aliens to link up with people already in the country could lead to outbreaks in those final destination areas. Bringing those non-vaccinated individuals into our cities and towns is a second potential disaster.

There is little evidence that the Obama Administration is taking adequate steps to mitigate these health risks. In fact, there seems to be at least some indications that they are not keeping up with the issue in the rush to warehouse some, and “move” the others in to the general public.

Bottom line: These are all unnecessary risks to the public health of American citizens that should be avoided.