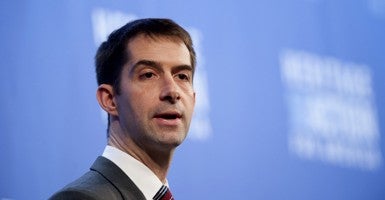 Sen. Tom Cotton, R-Ark., is concerned about what he calls the Obama administration’s “all carrot and no stick” approach to Iranian nuclear power.

During his remarks at Heritage Action’s 2015 Conservative Policy Summit, Cotton said that what began as an “unwise policy” of appeasement has morphed into a “dangerous farce.” Nuclear proliferation in Iran could result in the “rogue state” carrying out strikes on nations it views as the “Little Satan” [Israel] and the “Great Satan” [the United States].

According to Cotton, Iran obtaining nuclear capabilities would be “quite literally apocalyptic.”

But despite the risks of a nuclear Iran, Cotton says the Obama administration continues to appease Iran:

U.S. negotiators have surrendered repeatedly to Iran’s demands; conceding a right to enrich uranium, allowing Iran to keep its plutonium-producing reactor – asking only that its centrifuges be disconnected instead of dismantled – permitting research and development into advanced centrifuges, excluding the military dimensions of Iran’s nuclear program and its ballistic-missile program from the scope of the negotiations, and even agreeing to an expiration date for any final deal. In return for these concessions to Iran, the U.S. has given and will give Iran billions of dollars more in sanctions relief.

“What’s wrong with this picture?” he asked.

He advocated courses of action the United States could take to shift our Iranian policy; including supporting a regime change, ceasing approaching Iran with “appeasement” and “concessions,” instituting “crippling new sanctions” and not shying away from the threat of force.

He called for complete nuclear disarmament in Iran, including mandating on-site checks by officials from Western nations.

Cotton said that the current administration is “risking national security” to “secure a presidential legacy:”

One can only suspect an unspoken entente between the Obama administration and Iran: The U.S. won’t impose new sanctions on Iran and will allow it to develop threshold nuclear capabilities, while Iran won’t assemble a bomb till 2017.

Cotton concluded by telling the audience that despite the president’s wishes, only Congress has the constitutional authority to lift sanctions on Iran.