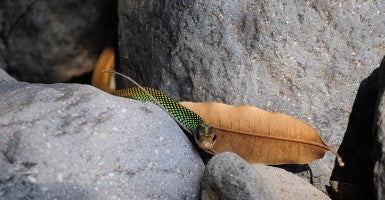 Much of the border areas in South Texas are considered national wildlife refuge areas, which are protected lands overseen by the U.S. Fish and Wildlife Service.  The Lower River Grande Refuge, for example, runs for 275 miles along the Rio Grande River, which is on the border of Texas and Mexico. The Santa Ana National Wildlife Refuge is a meager 2,000 acres, but the Laguna Atascosa National Wildlife Refuge encompasses more than 97,000.

Why is this an issue? Because the majority of people illegally trying to enter the U.S., whether drug smugglers, human traffickers or those seeking a better life in America, are coming across these protected lands.

They choose to cross the border across to those protected lands because they know it’s harder for the border patrol to apprehend them in these areas, thanks to rules made by the U.S. Fish and Wildlife, which is part of the Department of the Interior.

Border Patrol agents face severe restrictions on what they can and can’t do on these protected lands – despite the fact that the  areas are right on the border.

Agents are allowed to drive along already established dirt roads primarily running parallel to the Rio Grande River, but they can’t create new roads through grassy areas or go “off-road.” As a result, agents check the dirt roads for foot prints. If they do find signs that someone or a group has crossed, they have two choices: They can either get out and follow on foot, or they can drive to another road to see if that group is already past that point.

As you can imagine, those crossing illegally have figured out how to use the agents’ restrictions to their advantage. Border agents are forced to “follow the dirt road” while illegal aliens and drug smugglers pursue whatever path gets them where they want to go.

Aside from road problems, border patrol agents and other law enforcement officials have trouble gaining access to the protected lands. When I traveled to visit the Texas-Mexico border last month, border officials told me that it is often private ranchers and landowners with property adjacent to these refuge areas who work closely with them to give them access, not the federal government. Perhaps that’s because they have seen firsthand the dangers presented when armed drug and human smugglers are crossing private property. I’m not suggesting we pave any wetlands or mow down trees. But there has to be a way to protect the species such as the southern yellow bat, speckled racer snake, and the “more than 900 species of beetles…that aids plant pollination” without making it so difficult for the border agents who are trying to keep illegal immigrants out of our country.

In 2008, after visiting the Mexico-Arizona border, Heritage expert James Carafano made the case that “going green on the border” and keeping border security out was actually bad for the environment.

“Illegal border crossers cut trails that speed erosion,” Carafano wrote. “They leave mountains of trash that pollute the desert and disrupt the nesting and hunting grounds of birds and desert animals. They also wreck private property, endangering the livelihood of ranchers and others who work in and nurture the lands on the high desert.”

Sadly, this is not a new problem. Back in the 1990s, the U.S. Fish and Wildlife Service fought the idea of putting up floodlights on the border near Brownsville, Texas, because they would “harass” various types of small cats.

Securing the border isn’t easy – and although most people would like to see the border made secure, there’s plenty of debate about whether walls, cameras, more border patrol agents or something else is the answer. But can’t we all agree that protecting our border and American citizens is worth the threat of running over a few speckled racer snakes?