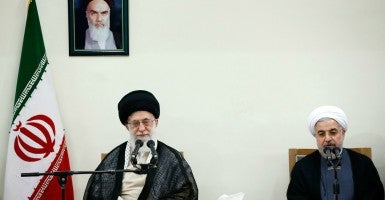 Iran is demanding the U.S. pay for 63 years of “spiritual and material damage.” The Iranian parliament cited examples of U.S. “hostile action” towards Tehran such as alleged U.S. support for a 1953 military coup in Iran.

Iran is one of the leading state sponsors of terrorism and has a long history of inciting violence in the Middle East.

This claim is delusional. Iran is one of the leading state sponsors of terrorism and has a long history of inciting violence in the Middle East.

For instance, it’s known that in 2004 Iran flooded Iraq with improvised explosive devices, which took the lives of 500 soldiers and Marines.

This [move] is part of the current regime’s efforts to blame all of Iran’s problems on the U.S., which they denounce as the “Great Satan.”

The U.S. has always been a convenient scapegoat for Iranian leadership.

Iran has long been in denial about the fact that the 1953 coup was carried out by Iranians. Although the CIA helped them get organized to overthrow Mossadegh, the coup plotters were motivated by their own deep opposition to Mossadegh’s disastrous leadership.

Blaming the U.S. is a strategic win-win for Iran.

Iran’s claim is in direct response to the U.S. Supreme Court’s decision last month demanding Iran hand over nearly $2 billion in frozen assets to the survivors and relatives of those killed in attacks that Iran organized, including the 1983 bombing of a U.S. marine barracks in Beirut that killed 241.

“We will not allow the United States to swallow this money so easily” he told a crowd of thousands.

In fact, it’s quite the opposite.

Iran knows it’s in the power seat in the relationship with the Obama administration. This is because the White House is desperate to claim the Iranian nuclear deal as a positive legacy.

It seems President Obama is willing to go so far as to blur truth in order to accomplish a legacy item—just ask Ben Rhodes.

In the end Iran’s actions are purely a retaliatory move designed to flex its muscles, provoke the U.S., and test its limits. What’s most troubling is that the Obama administration will likely look the other way and allow continued Iranian aggression.