Congress Must Ask Obama: Why Doesn’t Your Administration Cut U.S. Aid to the Palestinian Authority? 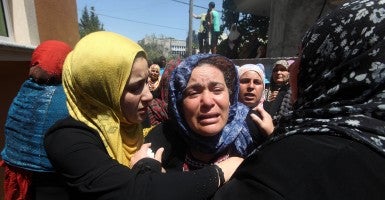 Considering its participation in the new Palestinian unity government, Hamas’ rocket attacks on Israel should lead the U.S. to cut the hundreds of millions in assistance it gives to the Palestinian Authority each year.

In fact, current law enacted in the Palestinian Anti-Terrorism Act of 2006 prohibits assistance to the Palestinian Authority unless the president certifies to Congress that “no ministry, agency, or instrumentality of the Palestinian Authority is effectively controlled by Hamas” unless Hamas has “publicly acknowledged the Jewish state of Israel’s right to exist” and “committed itself and is adhering to all previous agreements and understandings with the United States Government, with the Government of Israel, and with the international community”.

Hamas has not met any of these requirements.

But, much like its efforts to change the law to allow funding of U.N. organizations that grant full membership to the Palestinians, the Obama administration is seemingly intent on continuing current assistance despite the legal restrictions. On June 2, when asked what the U.S. position was on the new Palestinian government, State Department spokeswoman Jen Psaki stated:

Relying on this technicality, Psaki affirmed that the administration would continue to provide aid.

Over the past month, Hamas has launched rocket attacks against Israel. Individuals associated with Hamas have been accused by the Israeli government of the kidnapping and killing of three young men, including one with U.S. citizenship. When asked on June 30whether the Palestinian unity government was abiding by its requirements, Psaki replied, “[Y]es, they are making every effort to. Obviously, when there are incidents of violence, when there are rocket attacks, those are certainly cause for concern and we take every incident into consideration.”

>>> Why Kerry Was Wrong to Rebuke Israel With ‘Apartheid’ Comment

Following the announcement of a unity government, Sen. Rand Paul, R-Ky., offered legislation – the Stand with Israel Act of 2014 (S. 2265) – that would prohibit any direct U.S. assistance, loan guarantees, or debt relief to the Palestinians unless the president certifies that the Palestinian Authority has, among other things, renounced terrorism, formally recognized “formally recognized the right of Israel to exist as a Jewish state” and publicly recognized the state of Israel and purged all individuals with terrorist ties from security services.

Some groups, including the pro-Israel lobbying group AIPAC, oppose Paul’s legislation, believing that current law is strong enough. Unfortunately, that belief relies on the administration to adhere to the spirit and letter of the law, which it is obviously reluctant to do.

According to The Hill, Sen. Bob Corker, R-Tenn., blocked Paul’s effort to get unanimous consent on his legislation this week. Corker’s objection was not necessarily with the bill, but with the process, “This is an issue I really believe the committee itself should deal with first.” That is indeed the proper procedure, but the administration’s obfuscation compels Corker to lead the charge for immediate Senate Foreign Relations Committee consideration of this issue.