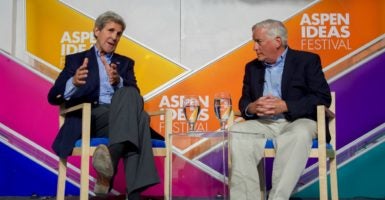 Their idea: frighten Britain from leaving, even after it’s voted to leave. (Photo: State Department/Sipa USA/Newscom)

Before Britain’s historic vote to leave the European Union last Thursday, the Obama administration was eager to pressure the British people to stay in.

They lost, but they can’t stop playing their games.

On Tuesday, Secretary of State John Kerry, speaking at the Aspen Ideas Festival, was asked if Britain’s decision could be “walked back,” and if so, how. Kerry responded:

Let’s be clear about this. The only mistake Kerry made was that, he, as an American official, announced in public that he’s eagerly plotting ways to overturn the result of a democratic referendum held by a close ally of the United States.

Perhaps the secretary should take a lesson from his boss’s adventures in Brexit.

In April, President Barack Obama went to Britain to give a lecture on why Britain shouldn’t leave the European Union. After he spoke, the Leave campaign surged in the polls. If bossy foreigners could sell Britain on the EU, it wouldn’t have voted out.

It might seem like Kerry’s not doing anything here except being foolish. But there’s a strategy here.

The EU doesn’t take losing lying down. Right now, it’s busy claiming that Britain doesn’t have a plan for life after Brexit. And Kerry’s chiming in.

Their idea: frighten Britain from leaving, even after it’s voted to leave. That’s just like the EU, which can’t help but believe that no one can figure anything out without guidance from on high—or rather, from Brussels.

Sure, democracy is messy. So is pulling your nation out of the grasp of the EU octopus.

But that’s the way freedom works: It means you make decisions democratically, and locally, and you figure out what works. The EU doesn’t like that. Nor does Kerry. It’s too bad for them that Britain’s already voted. It’s time for them to accept reality.

After all, as Kerry’s boss likes to say, elections have consequences. Yes, they do. And one consequence of last week’s vote is that Kerry’s side lost.