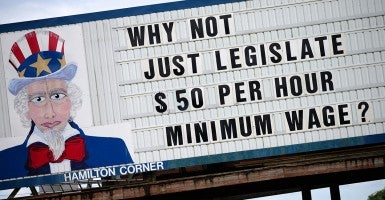 In Seattle, a grassroots organization has submitted a petition complete with nearly 20,000 signatures—well above the 16,000 signature prerequisite, calling for a ballot referendum to repeal the city’s minimum wage hike, which will eventually increase the hourly wage to $15 an hour.

On Wednesday, Seattle Forward, a non-partisan coalition of local business owners and citizens, delivered a referendum request they hope will qualify their measure for a popular vote during the next election.

The group seeks to overturn Seattle’s historic $15 “living wage” law that was approved unanimously by the City Council and passed into law by Mayor Ed Murray last month. If approved by the city clerk’s office, Seattle citizens would vote up or down directly on the measure at the ballot box.

>>> Teens Need Summer Jobs. Too Bad There Aren’t Many.

“Right now, the (Seattle) ordinance on the table we think is going to be pretty damaging to the city from the business perspective, and from the workers’ perspective,” explained Angela Cough, co-chairman of Seattle Forward, to Reuters.

Sage Wilson of the organization Working Washington, which supports the living wage law, disagrees. In an interview with Fox News, Wilson characterized Seattle Forward as a “small fringe group” who has employed “shady tactics to repeal that law.”

James Sherk, a senior analyst at The Heritage Foundation, says there’s no room for serious debate.

The Seattle Forward petition represents the second legal challenge to be mounted. Last month the International Franchise Association filed suit against the city over the $15 wage hike.