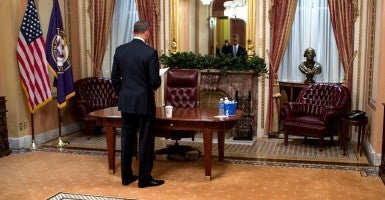 Flip through the latest National Security Strategy and the Pentagon‘s Quadrennial Defense Review — these are the documents describing how President Obama envisions using foreign and defense policy to keep the United States safe, free and prosperous in a world that appears increasingly unfriendly to America’s interests.

The words “strategic early warning” don’t figure in either document.

Why care? Because part of the intelligence community’s job is to provide assessments that anticipate great events or changes of importance to national decision-makers — before they happen.

Strategic early warning has been an important mission since the establishment of the intelligence community after World War II. Foremost in the mind of the Congress when it crafted the National Security Act of 1947, which was the genesis of modern American intelligence, was that the U.S. should never have to bear the burden of another Pearl Harbor.

Interest in the importance of foreknowledge was reinforced by the 9/11 commission which assailed the intelligence community for both a “failure of imagination” and the inability to “connect the dots.” Doing so might have helped prevent the terrorist attacks on New York and Washington.

That’s not to say early warning is a substitute for having the capabilities to respond to unanticipated threats, or that a serious early warning regime will always work. No military venture is greater folly than one where success is predicated on near-perfect intelligence.

Modern history is replete with examples of U.S. intelligence falling short, from the first Soviet A-bomb test, to the Korean War, to the fall of the Berlin Wall.

The standard, however, is not perfection. The intelligence community doesn’t have to act like a seer. But it should have mechanisms to anticipate future challenges. This allows leaders to make contingency plans for responding to danger or taking measures to mitigate future threats.

In the last few years, however, the Obama administration has acted “surprised” by incident after incident of swift foreign policy reversals.

The White House was unprepared for the meltdown in Libya that spawned an attack resulting in the death of four Americans at the U.S. consulate in Benghazi.

Our Oval Office stood dumbfounded when the Ukraine crisis boiled over and Russian troops marched into Crimea.

Obama had no “Plan B” for Iraq crumbling in the face of an invasion of Islamist extremists out of Syria.

Now the administration scrambles to respond to flood of refugees running away from spiraling violence, corruption and chaos in Guatemala, El Salvador, and Honduras.

These are not even what analysts call “black swans,” the kinds of crisis the intelligence community isn’t looking for. In each case, area experts who operate mainly on “open source” information — the intelligence they pick up talking to sources in the region, checking social networks, and reading publicly available material — were warning that storms clouds were gathering.

Yet in every case the administration seemed bewildered and surprised when the worst happened.

On the surface, the president’s disengagement strategy looks like a mayor who has disbanded the fire department, because he can then shrug when a fire breaks out and say, “What can I do?”

Whatever the method the president is using, he seems content to just deal with problems as they crop up. And that’s a poor strategy for securing America’s place in the world.