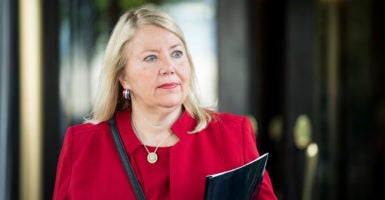 After only two months in Congress, Rep. Debbie Lesko, R-Ariz., has made a splash in the immigration debate, introducing a measure that would require a review of all ports of entry for security threats. (Photo: Bill Clark/CQ Roll Call/Newscom)

Coming from a border state, one of the newest members of Congress is making her presence felt in the immigration debate by introducing legislation that would require the Department of Homeland Security to review all ports of entry to the U.S. for possible security threats.

Lesko arrived in the House of Representatives from Arizona’s 8th Congressional District after winning an April 24 special election to replace former Rep. Trent Franks, who resigned in December amid allegations of sexual impropriety.

Sworn into office May 7, Lesko joined the conservative House Freedom Caucus, and at the monthly Conversations With Conservatives event Tuesday discussed the importance of her legislation.

“This is one of the top issues, not only in my district, but throughout Arizona,” said Lesko, who was the newest member of Congress until July 10, when another Republican winner of a special election, Michael Cloud, was sworn in from Texas, another border state. “People want to make sure that the border is secure, and that our nation is safe.”

The bill has co-sponsors from all over the country, she said, because “the entire country wants to make sure that we stop this illegal activity that’s happening: human smuggling, drug trafficking, sex trade. It’s a very important issue that needs to be resolved.”

Lesko said officials at the Department of Homeland Security were “supportive” of her proposal,  and she hopes that the White House will be as well.

“A review of threats and operations at U.S. ports can certainly help the U.S. better define the problems we face,” said David Inserra, a policy analyst at The Heritage Foundation specializing in issues of homeland security.

“Improving legitimate trade and travel while better targeting and countering specific threats are critical objectives that Congress and the administration should pursue,” he added.