Foreign Policy Experts Warn Against Iran Deal, Calling It ‘Threat’ to US Security 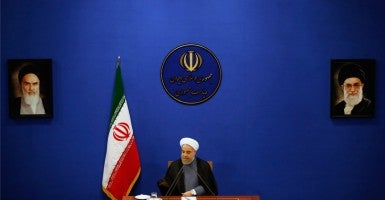 Ilan Berman, vice president of the American Foreign Policy Council, suggested the implementation of the Iran deal is more dangerous than its failure during a Heritage Foundation panel on Thursday. (Photo: Abedin Taherkenareh/EPA/Newscom)

President Barack Obama has launched a sweeping campaign to sell his historic Iran deal to Congress, advertising the accord as the sole alternative to war with Tehran to convince skeptical lawmakers to buy in.

Foreign policy experts and opponents of the deal pushed against the administration’s pitch during a Heritage Foundation panel Thursday, arguing that the reality is more complex.

Emanuele Ottolenghi, a senior fellow at the Foundation for Defense of Democracies, said the administration’s claim that international sanctions would easily snap back if Iran violates the accord is also applicable to the front end of the deal.

“You can’t say, ‘I have this tool to snap back and it’s fairly easy to snap back if there is agreement’ … but then say the alternative to this deal is war,” he said. “You have a whole arsenal of other policy choices and to suggest otherwise is disingenuous.”

Ilan Berman, vice president of the American Foreign Policy Council, also disputed the administration’s pitch, suggesting that the implementation of the deal is more dangerous than its failure.

He argued that the agreement threatens U.S. security and adversely impacts national interest, noting the amount of money pouring into Tehran’s economy through some $100 billion in sanctions relief.

To place the impact into perspective, Berman noted that Iran’s 2014 annual GDP was $415 billion. If the deal remains intact following congressional review, Berman said the sanctions package heading to Tehran in the next 6 to 8 months would be nearly a quarter of its current economy.

“This is larger than the entire Marshall Plan for the reconstruction of Europe,” Berman said, noting that that plan today would be worth $120 billion and was directed toward 17 countries, not one.

“What you’re looking at is a Marshall Plan for the Islamic Republic that is going to be applied in a fast-forward fashion in a way that’s likely to have tremendous salutary effects for anything relating to the Iranian economy, including both its domestic reconstruction and its ability to engage in foreign ventures.”

The Obama administration has maintained Tehran will place this money toward debt payments, trade costs, and domestic reconstruction.

Berman and Ottolenghi are skeptical, contending the majority of the money would funnel into Tehran’s foreign policy goals—namely, its involvement in funding terrorist groups.

“This is a real expenditure, and it’s also one as a result of sanctions relief that is likely to grow exponentially,” Berman said. “Iran will have more capital to do the same things that it is committed to doing already, even when it’s sanction constrained.”

He predicted that sanctions relief will transform Iran from a “partner” to a “patron” of oppressive regimes it currently backs, including Syria, Yemen, and Venezuela.

“I think that the underlying assumption here is that the nuclear deal will unlock relations between Iran and the West by empowering those inside the regime who understand that Iran has to change in order to remain a player in the international community,” Ottolenghi said.

Berman agreed, saying White House talking points and the scope of sanctions relief has made clear the deal is intended to “fundamentally reset” U.S.-Iranian relations.

Not all experts are opposed to the deal. Earlier this week, the leader of a group opposing the Iran deal changed course and quit his post, arguing that the U.S. would be put in a weaker position if Congress rejects the agreement.

“I think President Obama’s strategy succeeded,” said Gary Samore, who had led the bipartisan advocacy group United Against Nuclear Iran. “He has created economic leverage and traded it away for Iranian nuclear concessions. If I knew for certain that in five years they [Iran] would cheat or renege, I’d still take the deal.”