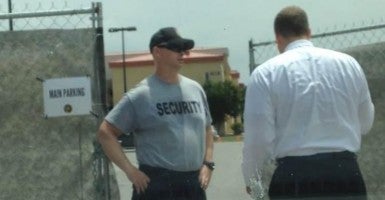 Rep. Jim Bridenstine, R-Okla., was denied access to a Health and Human Services facility at Fort Sill that houses up to 1,200 illegal immigrant children. (Photo: Office of Jim Bridenstine)

A congressman trying to visit a federal facility housing unaccompanied illegal immigrants from Central America was denied access to the building.

According to a press release, Rep. Jim Bridenstine, R-Okla., yesterday attempted to visit the facility at the Fort Sill Army post—run by the Department of Health and Human Services—in Lawton, Okla., but was told that he would have to schedule an appointment to enter the building.

Bridenstine says an HHS official told him that he could schedule a visit in three weeks. He added:

There is no excuse for denying a federal representative from Oklahoma access to a federal facility in Oklahoma where unaccompanied children are being held. Any member of Congress should have the legal authority to visit a federal youth detention facility without waiting three weeks. What are they trying to hide? Do they not want the children to speak with members of Congress?

Under current U.S. law, Border Patrol agents are required to take child migrants who aren’t from Mexico into custody, screen them and transfer them to HHS within 72 hours.

HHS keeps the children at detention centers until it can unite the children with family or a sponsor in the United States, before they appear in immigration court to determine their status.

More than 52,000 unaccompanied children and 39,000 women with children have been apprehended at the southwest border this year.

Border officials have told The Daily Signal that three of four people crossing the Texas-Mexico border are from countries other than Mexico.