On the Texas-Mexico Border: The View From the Front Line 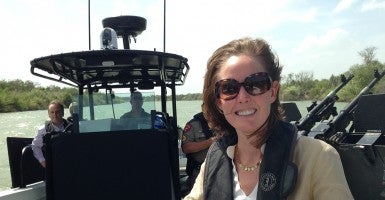 • Border officials: 3 of 4 people crossing the border are from countries other than Mexico.

• State lawmaker: “Texas is not waiting for Washington to act.”

Last weekend, I visited McAllen, Texas, a hotbed of activity in the recent immigration surge on the U.S. – Mexico border. I rode with U.S. Rep.  Louie Gohmert, R-Texas, on a boat with the Texas Department of Public Safety along the Rio Grande River and toured one of the busiest processing centers in the country as it dealt with the flood of illegal aliens from Central America. Steve McCraw, director of the Texas Department of Public Safety, and Jose Rodriguez, regional commander of DPS (pictured left-right here), led the briefing on Operation Strong Safety, the surge operation ordered by Texas Gov. Rick Perry in June to address the growing crisis on the border. They told us the surge is aimed primarily at fighting the drug cartels and human smuggling operatives that control much of the Rio Grande Valley border.

McCraw and Rodriguez said these Transnational Criminal Organizations are fueling the influx of illegal aliens coming from Central America. They believe TCOs are behind the media stories and advertisements in countries such as Honduras that encourage people to come and that they serve as coyotes/human smugglers. Criminals benefit from immigration surges: When border officials are overwhelmed by a flood of immigrants, their attention is diverted from monitoring drug smuggling.

Aiming more law enforcement at these criminal organizations and shutting down their operations along the Rio Grande and larger Texas border will go a long way to address the Central American and unaccompanied children issue, said McCraw and Rodriguez.

According to McCraw, the “objective is not to inconvenience them [the drug cartels] but to hurt them [operationally]. The drug cartel and human trafficking agents are a threat to communities not just on the border but across America.” This is the view from the dock of a park in McAllen that overlooks one of the widest areas of the Rio Grande River.  The land you see directly across is a park in Reynosa, Mexico, and the boat here belongs to the Texas Highway Patrol, which monitors the waterways.

Many of the unaccompanied children and family units are crossing in this area, and most immediately turn themselves in to the border patrol.

This video clip shows  a beach in Mexico approximately 200 to 300 feet across from the park in McAllen. The beach is a recreational and swimming area used by Mexican locals.  But it also is one of the main areas where smugglers bring immigrants from Central America and push them across the Rio Grande River in rafts or bring them across on jet skis.

According to law enforcement officials describing some of the specific challenges of securing this area of the border, one law enforcement officer, who works on the Texas border operation and who didn’t want to give his name, said the most dangerous parts of the job are going after those smuggling drugs across the border.

Another challenge he and others on the border face is that a majority of illegal crossers are coming across U.S. Fish and Wildlife area refuges – areas where border officials have limited access to roads and where the types of vehicles allowed are severely restricted. These two homes, not more than 250 feet from the U.S. shoreline, belong to Mexican drug lords, the officials said.  They stand on the Mexican banks of the Rio Grande River. Even at its widest parts, the Rio Grande is often very shallow and easy to cross.  Standing in the middle of the river in this photo are two Mexican men fishing, with Mexico on the right and Texas on the left. There are walls and fence structures along parts of the Texas southern border, but most areas are open.

One of the state lawmakers in our group was Rep. Bryan Hughes, a Republican who represents District 5 in Texas. When I asked him what he would want folks in other states to know about how this affects Texas and could affect them, he was thoughtful.

“Border security is not a state responsibility,” he said. “But the dereliction of duty by the feds affects us all. Texas is not waiting for Washington to act.”

The Lone Star State, Hughes said, is spending “hundreds of millions” on border security, and has just allocated “another $1.3 million per week for a surge in law enforcement resources.”

“Working with Border Patrol, county, local and state law enforcement, we will aggressively disrupt the drug cartels’ operations,” he said. “And we believe that will go a long way in reducing all illegal border crossings.”

For Texans in Hughes’ district, there are two top anxieties about the current border situation.

“My constituents are concerned about the safety and well-being of the thousands of unaccompanied minors who are flooding into Texas,” Hughes said. “Texans are also alarmed about the security risks to our country as drug smugglers, human traffickers and terrorists can more easily sneak across our southern border during this time of crisis.” This is the Department of Homeland Security building in McAllen, currently the busiest such facility in the U.S. It processes more than 1,000 people a day.  When illegal immigrants are apprehended by the border patrol, this is where they are brought.

After arrival, officials find out where they’re from and if they have a criminal record. Normally, this process should take a day,  but because federal immigration authorities have not been able to handle the flood of immigrants, people are being kept here for three days or more.

When I was there in June, more than 300 illegal border crossers were being held here, most from Central America. They stay in holding cells with large windows so agents can monitor activities.  People are divided by age and sex, except for mothers with children. This is the sally port on the backside of the DHS building. Normally this is a secure area where vans and buses would enter to transport those in custody.  But because of the overwhelming number of illegal aliens crossing the border, it is currently being used to shelter more than 500 people.

It’s an open-air area with just fans to provide a reprieve from the Texas sun. There are no beds or cots: People are given silver blankets, like you’d see at a race event, to sit and lay on. There are no bathing facilities, just portable toilets. Many of those coming across have lice and other skin infections. To try to prevent the infections spreading, they are sectioned off from the larger group. Albert Spratte, pictured on the left talking with Gohmert, is the sergeant at arms, Union 3307, for the National Border Patrol Council. According to Spratte, drug and human smugglers monitor the border and river crossing areas on the Mexico side, along with bus and train stops in Mexican border towns, to ensure no one comes across without paying the smugglers to get them across.

“We’re good at what we do,” Spratte said. “We’re being asked to do things we’re not supposed to do. We’re supposed to stop and detain. Immigration and Customs Enforcement is supposed to deport. The situation is worse than you think, and it’s not going to change until you start deporting people.”

As for the facilities where immigrants are held until ICE steps in,  “If we were a jail, we’d be closed down,” he said.

According to officials I spoke with, three out of four of those crossing the borders are “OTMs–the term for “Other Than Mexican.”  At least one in four are children, 45 to 50 percent are family units, and the male/female ratio is roughly 60-40.

Although the current wave of border crossers is primarily from Central America, people from more than 140 different countries, including Bangladesh, Pakistan and Saudi Arabia, have crossed the southern border. Earlier this month, 33 people from China were apprehended.

As to why so many from Central America are coming now, a top border offical told me, “They recognize they’ve overwhelmed the system. And they know they are going to be released and told to report, but a very minimal number of them ever do.” In other words, those released to family members in the U.S. are supposed to report to the local immigration and customs office once settled to begin their deportation process, but few ever do.

Since I’ve returned from the border, a number of people have asked me about the morale of border agents dealing with this crisis. I would say the majority, although seriously overworked, are encouraged by the recent attention the issue has gotten and the surge of law enforcement promised by the state of Texas.

A senior border official, who didn’t wish to give his name, summed up the view I heard from many there when I asked how his unit was handling the situation: “For border patrol, it’s a good news story.  We’re doing our job.

“For the federal government … not so much.”