Don’t Listen to the Soccer Cranks. The World Cup Is Awesome. 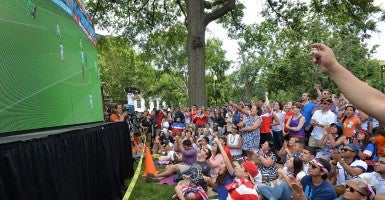 There’s no doubt about it: Soccer is the world’s favorite sport. That is reaffirmed every four years when the world stops to watch the World Cup.

There are many reasons why soccer is loved by so many, but one is the game’s simplicity. All you really need is a ball. Goals, shin guards and uniforms are nice but not necessary. In a world of abundant poverty, soccer is an incredibly accessible recreation.

This helps explain why the World Cup is a truly global experience. It has the ability to gather a billion people around a television set. Yes, you read that right. According to ESPN, at least 1 billion people tuned in to watch the final of the last World Cup.

Yet to my disappointment, my fellow Americans are mainly apathetic about the World Cup.

With envy, I watched Dutch fans dance in the streets of Amsterdam dressed in orange cheering on their team in a big plaza. And I’ve imagined what it would be like to live in a place such as Argentina and Brazil during a World Cup to experience the paralysis, to be consumed by patriotism.

Americans should imitate other countries and use the World Cup as a chance to express patriotism. We should celebrate our country’s natural beauty and the creative and brave people who have left an indelible imprint on the rest of the world.

We should gratefully remember how we perfected modern capitalism, which remains the greatest force to reduce poverty the world has ever known. And we should remember the United States is the world’s most generous nation. And it shouldn’t surprise us to know that one of our most colorful fans in Brazil, Mike D’Amico (the Teddy Roosevelt look-alike), raised money to extend his time in Brazil supporting the U.S. team, and will donate any funds that exceed his expenses to charity.

But beyond our philanthropy, we also know that our country has played an enormous role in allowing us to live in a safer and freer world. From helping to free Europe from tyranny, to staring down communism, our love for liberty and justice has no rival.

So why shouldn’t we celebrate being Americans? We don’t ever really need an excuse, but if there was ever a party for it, the World Cup is it.

We get a chance to put aside humility and proudly wear our red, white and blue to cheer on our gladiators on the world’s biggest stage. We can be silly, irreverent, crazy and embrace our Americanness.

As a naturalized citizen, I know firsthand that being an American is an incredible privilege. Having our national team compete in the World Cup is an honor that’s a distant second, but it’s still a pretty big deal. Which is why last Thursday’s accomplishment to reach the knock-out stage was all the more sweet. We are in an elite stage of the competition, and many soccer-crazy countries, including Italy and England, are on the outside looking in as we march on for the grand prize.

Even if you find soccer boring and dull, this is a chance to show love for our country with the world watching. (And maybe as you watch you’ll gain some appreciation for the game, and for the players’ athleticism and endurance!) Set aside your soccer-crankiness and join the nearly 25 million Americans tuning in to watch the World Cup—Americans crammed into Grant Park in Chicago, and in the Power and Light District in Kansas City. There are even American service men and women in tents in remote parts of Afghanistan cheering on the U.S.A.

Who cares if soccer is not your sport? Embrace the moment. Let’s cheer on our team with reckless abandon, ignoring the pundits saying that we don’t stand a chance to beat Belgium and Argentina and whomever else we’d have to beat for the Cup. The Fourth of July is this weekend. Start your celebration early by cheering on our national team. There are 23 Americans in Brazil today that could use our encouragement as they take on Belgium in a competition everyone is watching.