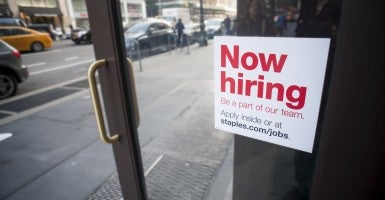 Is a job a necessity or an opportunity? Earlier this month, Dylan Matthews provocatively challenged the bipartisan tradition of praising work. In Matthews’ view, work ought to be optional for Americans. We disagree, both because work is ennobling and because the alternative is to force others to work for you. But we are also interested in whether Americans’ work habits are driven more by necessity or opportunity. Most Americans of working age have one job, but some have two or more. Do these multiple job holders work more because they need to or because they can?

About 6 percent of people with college degrees worked multiple jobs, but less than 4 percent of those with only a high school degree did so.

So which factor is more important? A new paper by economist Etienne Lalé found that highly educated people are measurably more likely to hold multiple jobs than people with fewer years of education. About 6 percent of people with college degrees worked multiple jobs, but less than 4 percent of those with only a high school degree did so. And just 2.5 percent of high school dropouts worked two or more jobs.

That’s good news: Multiple job-holding in the U.S. is more often a product of opportunity than necessity. On the other hand, according to Lalé, since 1994, the percent of individuals holding multiple jobs has declined to about 5 percent of the working-age population from about 6.5 percent in the second half of the 1990s. The trend does not seem cyclical and there is no apparent response to either of the recessions during the period Lalé studied. The author also notes that the decline cannot be explained by demographic trends. The research indicates that single jobholders are less likely to take a second job, so the “entry rate” to multiple job-holding is lower than it used to be. But those currently working multiple jobs are no less likely to quit one of the jobs than before.

So, fewer Americans seem to be taking advantage of the opportunity to have a second job. On the other hand, it’s likely that fewer Americans face the necessity of a second job as well. What should policymakers do in such a situation? Promote a free and flexible labor market, where anyone who wants to work can find a job—or two.

Mitchell Tu is currently a member of the Young Leaders Program at The Heritage Foundation. For more information on interning at Heritage, please click here.