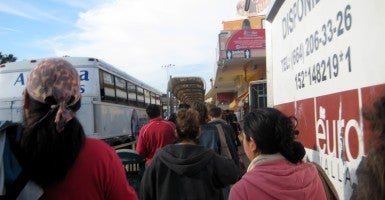 Tony Snow was dying. But the White House press secretary, still determined to serve his president, returned to work as long as his cancer was in remission.

Many thankless tasks awaited the former Fox News journalist. One of them was brokering meetings with conservative leaders — asking them to “hear out” George W. Bush‘s plan for comprehensive immigration reform.

One meeting included Edwin Meese, who had served as U.S. attorney general under Ronald Reagan. Meese took the meeting out of respect for Snow and Bush, but he left unmoved.

The plan Bush proposed was similar to a law that Reagan had supported in 1986, granting a blanket amnesty in return for beefed-up border security, better enforcement of immigration laws, and serious visa and immigration reforms.

At least, that’s what it said on paper. But when it came to implementation, the Reagan-era initiative failed. Abysmally.

Rather than “solve” the problem of illegal immigration once and for all, the number of people unlawfully present quadrupled in the years after the amnesty. Meese argued there were clear lessons from this experience. One major lesson: Granting amnesty simply encourages more unlawful migration.

Indeed, in the run-up to the vote on the Bush amnesty there were reports of increased illegal border crossings. Ultimately, the Bush proposal failed to pass Congress.

Since entering the Oval Office, President Obama has championed “comprehensive reform” that in many ways mimics the Bush reform proposal. He even tried get ahead of the debate by arguing he was doing everything possible to secure the border. In February 2013, his Homeland Security Secretary, Janet Napolitano, declared that border had “never been more secure.”

But while the administration has talked tough about border security and “cracking down” on illegal immigrants, it has consistently given in to pressure from activists who advocate full rights and benefits for non-citizens. In reality, the administration has substantially weakened the enforcement of existing immigration law.

Meanwhile, it continues to insist that a “comprehensive” bill—that includes amnesty—is the only way to improve the problem it has actively exacerbated.

The White House‘s latest “trick” has been to argue that the flood of minors making the risky trek to cross America’s borders is yet another example of a broken system that badly needs fixing.

But the facts speak for themselves.

In one respect the problem isn’t new. Last year, the Office of Refugee Resettlement reported that the Department of Health and Human Services had more than 2,000 minors in custody from Guatemala, El Salvador and Honduras. Presumably most of these were captured and detained as they entered the country.

But, these numbers have skyrocketed in recent months. By year’s end, the number of children and teenagers traveling alone from these three countries is expected to approach 90,000.

Throughout Central America, “coyotes” (human smugglers) are spreading the news that now is the time for kids to come to America. Why? Because under this administration, they are sure to get asylum.

In part, this mass migration of children reflects the desire to escape poverty and, often, violence in their homelands. But equally tragic is that the specter of “amnesty” is luring these youngsters into making the dangerous trek north—and leaving them vulnerable to exploitation and violence even if they succeed in making it across the border.

Much can and should be done to address the glaring shortfalls in our U.S. border security and immigration programs. But making amnesty an element of every reform effort only contributes to gridlock, exacerbates the misery of those caught in the middle, and makes finding just, compassionate and effective solutions even harder.

Originally posted on the Washington Examiner.