In Past Decade, Traffic Fatalities Involving Marijuana Have Spiked 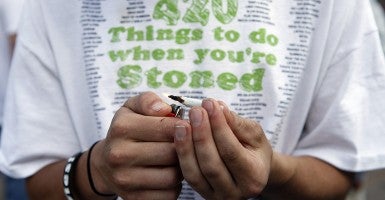 Drinking and driving has met its match. Marijuana intoxication has been the focal point of multiple studies finding a link between the drug and driving fatalities.

Traffic fatalities involving marijuana have tripled in the U.S. over the last decade, increasing from 4 percent in 1999 to 12 percent in 2010, according to a toxicology examination conducted by Colombia University reported on by USA Today and Cars.com.

“Currently, one of nine drivers involved in fatal crashes would test positive for marijuana,” Guohua Li, co-author of the study and director of the Center for Injury Epidemiology and Prevention at Colombia told HealthDay News in February. “If this trend continues, in five or six years non-alcohol drugs will overtake alcohol to become the most common substance involved in deaths related to impaired driving.”

Another study conducted by the NHTSA found a strong trend in marijuana-related driving accidents among people younger than 25. “One in eight high school seniors responding to a 2010 survey admitted to driving after smoking marijuana,” reported USA Today and Cars.com. “Nearly a quarter of drivers killed in drug-related car crashes were younger than 25. Likewise, nearly half of fatally injured drivers who tested positive for marijuana were younger than 25.”

Cully Stimson, manager of The Heritage Foundation’s National Security Law Program, believes that the increase in marijuana-related driving fatalities is due to the drug’s legalization in Colorado and Washington.

“It sends everyone a clear message that marijuana use is fine,” Stimson said. “The reality on the ground in Colorado is that drug driving deaths have exploded. The same is seen in Washington state.”

The National Institute on Drug Abuse reported in April an increase in Colorado of fatal motor vehicle crashes linked to marijuana-positive drivers since the state’s legalization of the drug, while a “similar increase was not seen in the 34 states that did not have medical marijuana laws.”

“This is a natural outcome in this effort to hoodwink the American people into believing that marijuana is medicinal and harmless when in fact it is neither,” Stimson argued.

Proponents for marijuana legalization often argue the opposite. The National Organization for the Reform of Marijuana Laws, a top advocacy group in the effort to legalize the drug, claims that evidence related to marijuana inebriation “does not appear to play a significant role in on-road traffic accidents.”

Stimson argues that a large reason for this is because the “radical experiment” of legalizing marijuana is new, so “we don’t have a large body of evidence like in the realm of alcohol use to go off of.”

Stimson also points to the inability of police to immediately drug test drivers that are suspected of marijuana use as a hindrance in current studies.

“Police can immediately detect the presence of alcohol in the filed by using the handheld breathalyzer machine for suspected drunk drivers,” Stimson said. “There is no similar portable, mechanical device for police to confirm their suspicions that drug-drivers are high on marijuana nor are drug recognition experts commonplace across police forces.”