Peter Strzok Is Willing to Testify Before Congress, His Lawyer Says 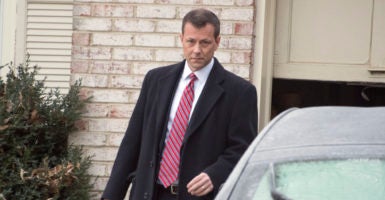 FBI official Peter Strzok is willing to testify voluntarily before Congress in an effort “to clear his name,” his attorney says.

“Special Agent Strzok, who has been fully cooperative with the [Department of Justice] Office of Inspector General, intends to voluntarily appear and testify before your committee and any other Congressional committee that invites him,” a lawyer for Strzok, Aitan Goelman, said in a letter sent Saturday to House Judiciary Committee Chairman Bob Goodlatte.

Goodlatte on Friday informed Democrats on the Judiciary committee of his plans to subpoena Strzok to testify before the panel about his role in both the Hillary Clinton email investigation and the Trump-Russia probe.

As the FBI’s deputy chief of counterintelligence, Strzok was the bureau’s lead investigator on “Crossfire Hurricane,” the investigation into Russian interference in the 2016 presidential campaign.

He was also one of the top investigators on the Clinton email probe.

A report from the inspector general released Thursday blasted Strzok and Page over their anti-Trump text messages.

The report revealed one text message that had not previously been released.

The text message was missing from the Justice Department’s production of Strzok-Page documents previously sent to Congress. The inspector general’s investigators recovered the exchange last month.

The inspector general’s report said that the text message “is not only indicative of a biased state of mind but, even more seriously, implies a willingness to take official action to impact the presidential candidate’s electoral prospects.”

“This is antithetical to the core values of the FBI and the Department of Justice,” the report reads.

Goelman told The Washington Post that there was “no question” that Strzok regrets sending the text messages. But he said he believed Strzok was “expressing his political opinions in what he thought was a private text conversation, and he regrets that this has been weaponized by people with political motivations to try to discredit the Mueller investigation.”

“He thinks that his position, character, and actions have all been misrepresented and caricatured, and he wants an opportunity to remedy that,” Goelman told the Post of Strzok’s willingness to testify to Congress.

The lawyer said that Strzok “intends to answer any question put to him, and he intends to defend the integrity of the Clinton email investigation, the Russia collusion investigation to the extent that that’s a topic, and his own integrity.”

Strzok “wants the chance to clear his name and tell his story,” said Goelman, who is a partner at the firm Zuckerman Spaeder.