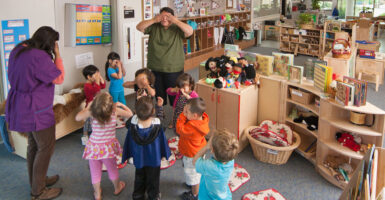 Preschool classrooms like this one are no place for a book like "Jacob's New Dress," which promotes the transgender agenda. (Photo: Billy Hustace/ Corbis Documentary/Getty Images)

Michael Ryan is executive editor of The Lion, a publication of the Herzog Foundation.

A school district that gave preschoolers a book on cross-dressing has changed its procedures for giving out books after news of the incident surfaced late last month.

As first reported exclusively by The Lion and The Heartlander news sites, a 4-year-old preschooler in the Turner School District in Kansas City, Kansas, took home the book “Jacob’s New Dress.” It’s a picture book in which a little boy wears girls’ clothes and even competes with his friend Emily to be a princess.

“I don’t think this should be, obviously, any kind of a subject for a school to be speaking about,” Jim Clay, the 4-year-old’s grandfather, told The Lion. “The sexualization of our children in society today is just disgusting. The grooming that’s taking place is disgusting.”

Clay reported the Turner district had explained what happened and what changes will be made to prevent such a sexually provocative book from being tendered to young children there again.

“Please be assured that these books were not a part of district curriculum, were not required reading, and were sent home to be read at the discretion of parents,” the district wrote without naming the book in question or explaining how it escaped the district’s notice.

“Moving forward, our district staff will be preapproving all books and activities provided by Literacy KC to ensure they are age-appropriate and align with our district curriculum and educational mission,” the statement concluded—notably, without apology to offended parents and guardians.

“This past spring we learned State Farm was distributing transgender books in Florida,” says Mary Miller, an Oregon-based parents’ rights advocate who spoke about the cultural divide between parents and schools in Kansas City at a community forum in June.

“Now Literacy KC is doing the same thing in Kansas City preschool classrooms, after having received a multimillion-dollar grant from the Department of Elementary and Secondary Education,” Miller said, adding:

There is a coordinated effort by trans rights activist groups such as GLSEN (formerly the Gay, Lesbian & Straight Education Network) and the Human Rights Campaign to push transgender ideology on schoolchildren nationwide.

Literacy KC will need to clean up its act to regain the trust of parents and grandparents in the Kansas City community.

Moreover, as Turner has just done, other school districts may need to reconsider the wisdom of outsourcing the approval of classroom materials to even well-intentioned outside organizations.

The incident also raises questions about Literacy KC’s vetting process, and how many other school districts in the Kansas City region have handed out books such as “Jacob’s New Dress” to the youngest of students—and whether parents have been made aware of it.

The Lion sent questions to both the Turner district and Literacy KC. Among other things, we asked Literacy KC if this book is being given out to other districts in the area, and if so, which ones; if Literacy KC continues to consider a cross-dressing book to be appropriate for such young children—or, if not, whether it will suspend the book’s distribution; and whether it is fair for such sexually and gender-identity suggestive books to be given to such young children without preapproval by parents.

The Lion also has requested copies of any correspondence between the Turner district and Literacy KC about the incident.

The Turner district is not the only one that has been roiled by controversy over this and other gender-fluidity books in early grades. The book was noted as objectionable to parents in a news report last month about outrage over transgender policies in Lawrence Township Public Schools in New Jersey.

“Can we just get back to teaching?” one New Jersey parent was quoted.

“Jacob’s New Dress” also was pulled from the Charlotte-Mecklenburg Schools system in North Carolina in 2017.

The media portray such actions as right-wing book-banning rather than a matter of discretion, and “Jacob’s New Dress” as “part of a first-grade lesson on what to do when someone is bullied.” Critics counter that anti-bullying messages can be transmitted outside of a cross-dressing context.

Moreover, in making the issue one of “book-banning,” the media overlook the role and rights of parents in bringing up children. The media don’t, for instance, call it “banning” when the Motion Picture Association of America warns parents about age-inappropriate materials in films, with its PG, PG-13, R, and NC-17 (adults only) ratings.

Yet, with books, it’s anything goes?

Not for Clay, nor many other parents and grandparents like him.

“My kids used to dress up like Power Rangers when they were kids, and we’d pretend that they were a Power Ranger with them,” Clay said. “I’m not interested in pretending that guys are girls and girls are guys.

“All three of my kids grew up in the Turner district. If there was any questionable material, they always allowed us to opt out or keep our kid home that day, and they would keep us informed. But apparently not with this.”

This article was originally published by RealClearEducation and made available via RealClearWire.