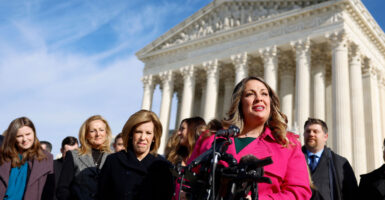 Lorie Smith, the owner of 303 Creative, a website design company in Colorado, speaks to reporters outside of the Supreme Court on Monday. The justices heard oral arguments in a case involving Smith, who refuses to create websites for same-sex weddings despite a state anti-discrimination law. Lawyer Kristen Waggoner, third from left, represented Smith in court. (Photo: Anna Moneymaker/Getty Images)

In an already packed Supreme Court term—one in which the justices will consider everything from racial preferences in the college-admissions process to President Joe Biden’s student-loan forgiveness plan—one case looms large: 303 Creative v. Elenis.

In this high-profile controversy, the court has been asked to decide whether the Colorado Anti-Discrimination Act—the state’s public accommodations nondiscrimination law—requires website designer Lorie Smith to create wedding websites celebrating same-sex couples in violation of her religious beliefs.

While Smith works with all people, regardless of their sexual orientation—a fact to which the state of Colorado has stipulated in lower court proceedings—she refuses to create custom websites celebrating same-sex marriages.

Can a public accommodations law force someone to convey a message with which they disagree? Colorado thinks it can. Smith disagrees, arguing that to do so would violate her First Amendment right to freedom of speech.

On Monday, attorneys for Smith, the state of Colorado, and the United States all had a chance to make their cases.

The oral argument was full of hypotheticals posed by the justices—and occasional verbal fireworks, as justices sparred with attorneys and each other.

In one instance, Justice Neil Gorsuch stopped just short of calling Colorado a bad actor, accusing the state of sending Masterpiece Cakeshop owner Jack Phillips to a “reeducation program” over his beliefs on same-sex marriage. Phillips was narrowly successful at the Supreme Court in 2018 in his religious-liberty defense against the state anti-discrimination statute, the same law at issue in 303 Creative.

Colorado Solicitor General Eric Olson retorted, “I strongly disagree,” saying he would characterize the penalty as simply a way to familiarize Phillips with the state’s public-accommodation law.

Olson had to concede it was.

A theme of the oral argument was how to determine whether by producing custom websites Smith was engaging in conduct (the sale of a good or service, for example) or speech. If speech, Smith’s First Amendment right to express only those messages she approves would prevail. If it’s conduct, Colorado would win.

Put another way, because the anti-discrimination statute prohibits discrimination based on someone’s status (sexual orientation, race, disability, etc.), refusing to provide a service to same-sex couples would be illegal. But if Smith was expressing a viewpoint or message on marriage through her web designs, the First Amendment would protect her right to be free from compelled speech.

GORSUCH: You think this is a status case. The other side thinks it’s … a viewpoint case. Is that fair, too?

FLETCHER: … I wouldn’t say that. I acknowledge that this is a status and a message case.

JUSTICE GORSUCH. OK … whereas they would say it’s a message case.

GORSUCH: But to think about it, the status versus message is … I just want to make sure we all agree that that’s the right way to think about this case

GORSUCH: Except for, that runs into all of those stipulated facts in which the plaintiff has said repeatedly that she will serve everyone, and she would deny everyone this kind of website.

In that, Gorsuch tipped his hand that he, too, thinks this is a “viewpoint” case—because Smith’s gay clients would be served, like everyone else, in any context that didn’t celebrate same-sex marriage.

Kristen Waggoner, general counsel at the Alliance Defending Freedom, who is representing Smith, began her argument by stating that Smith isn’t just selling a service, but is conveying a message. And she stressed that time and again, the Supreme Court has refused to force someone to convey a message that runs contrary to his or her beliefs.

Waggoner told the justices that the court’s 1995 decision, Hurley v. Irish-American Gay, Lesbian, and Bisexual Group of Boston, should govern Smith’s case. There, the Supreme Court held that Massachusetts could not require the organizers of a St. Patrick’s Day parade to allow an LGBTQ group to march, even though the group claimed that the failure to let it participate violated the state’s public accommodations law.

The court determined in Hurley that compelling the organizers to include the group would violate the First Amendment, because the parade organizers had the right to choose what message the parade conveyed, and that right included the ability to exclude contrary messages.

Under Hurley, the court must consider two questions; namely, whether the service or good involved is speech or conduct, and whether the speaker’s message was affected by the speech it was required to accommodate.

Waggoner argued that the service at the center of the dispute is Smith’s design services, which are “pure speech,” and that Colorado’s law requires her to change that speech “in untenable ways.” She clarified that Smith’s websites are not “plug and play,” and due to their customization, it would require her to promote and announce a marriage that she believes to be false.

As Waggoner argued, “Under Colorado’s theory, jurisdictions could force a Democrat publicist to write a Republican’s press release.”

Olson, the Colorado solicitor general, however, pointed to a 2006 case Rumsfeld v. Forum for Academic and Institutional Rights (FAIR), in which the Supreme Court held that a law withholding federal funding for colleges that restricted the access of military recruiters to students did not violate the First Amendment. Olson argued that just as in Smith’s case, the law in FAIR “regulates conduct, not speech” because it affected what the schools could do—afford equal access to military recruiters—and not what they could say.

The tension between the Hurley and FAIR cases may hold the key to the Supreme Court’s opinion in 303 Creative.

Justice Sonia Sotomayor asked Waggoner how a website represented Smith’s own message if the announcement of the wedding details were coming from her clients.

Waggoner clarified it was much like a ghostwriter hired to express a certain message. She added:

The Pulitzer Prize [in photography] doesn’t go to the customer or to the subject; it goes to the photographer, and there’s a reason for that. That reason is because you are requiring that artist to speak a message. It is their work. It might also be the customer’s and the customer can use that. But the First Amendment is broad enough to cover the lesbian website designer and the Catholic calligrapher.

The line is that no one on any side of any debate has to be compelled to express a message that violates their core convictions because, as this court found, it’s demeaning to them.

Justice Amy Coney Barrett also clarified that Smith has been careful to say things on her website “like I fully customize the look, feel, theme, message, color palettes, et cetera.”

Then Barrett posed a series of hypotheticals about other marriages that Smith might find objectionable, such as those that began as adulterous relationships, for example. Waggoner clarified that those, too, would be against Smith’s beliefs, and therefore she would choose not to create those websites, either.

Gorsuch provided what was one of the case’s critical distinctions: “So, the question isn’t who, it’s what?”

In his arguments for Colorado, Olson argued that granting protection to Smith’s refusal to create a same-sex wedding website would allow refusal of service to customers in other contexts based on status, and extend to racist, sexist, or bigoted views, permitting discrimination in public accommodations.

That prompted Barrett to retort, “You can’t get out of everything by defining public accommodation narrowly or broadly depending on it. I mean, you agree that in Hurley the parade was a public accommodation, as we held? Because Hurley is your hardest case, right?”

And, as Waggoner pointed out, the Supreme Court has also protected vile, awful, even reprehensible speech.

He clarified that in FAIR:

[W]hat was compelled was not considered speech. It involved the schools providing rooms for the military recruiter, and when it came to the question of compelled speech, what the Court said is, empty rooms don’t speak. But here, of course, the whole argument is that the speech is being compelled.

In her powerful rebuttal, Waggoner stressed that Colorado was asking the court to drive views like Smith’s from the public square, views about marriage that the Supreme Court stressed were honorable, decent, and protected views and forms of expression in 2015’s Obergefell v. Hodges and 2018’s Masterpiece Cakeshop v. Colorado Civil Rights Commission.

The government cannot and must not prescribe orthodoxy. As Waggoner argued, compelled speech is the tool of authoritarianism, and the Supreme Court has never allowed it. The right to be free from government coercion of speech was and is foundational to our self-governance, and a victory for Smith would be a victory for all Americans.

While the justices seemed concerned, based on their hypotheticals, over where to draw the line between “speech” and “conduct,” it seems likely, based on the oral arguments, that at least five of the justices are inclined to side with Smith.

If the pattern on the release of high-profile decisions from past terms is any indication, a decision in 303 Creative will likely be released in mid-to-late June, toward the end of the court’s term.