Colorado Is Again Trying to Compel a Wedding Vendor’s Speech. Supreme Court Has a Chance to Defend Freedom. 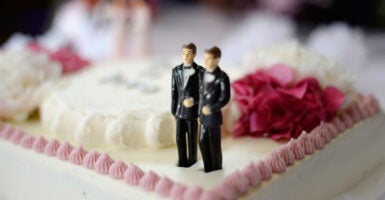 In 303 Creative LLC v. Elenis, the Supreme Court will decide whether a state’s application of a nondiscrimination law, which would compel a website designer to create a website for a same-sex wedding, which she believes violates her sincerely held religious beliefs, violates her right to free speech under the First Amendment. (Photo: Kevork Djansezian/Getty Images)

Some U.S. Court of Appeals have a long history of issuing decisions that are demonstrably hostile to wedding artists seeking to exercise their First Amendment rights.

Whether for wedding flowers or for custom designed wedding cakes, these courts have repeatedly circumvented the rights of business owners to both practice their religious freedom and refuse to affirm messages that contradict their religious beliefs in the provision of their unique services.

By applying nondiscrimination laws to businesses they deem to be public accommodations, the states of Colorado and Washington have so far found a way to subjugate the First Amendment rights of those proprietors to the desire of individuals seeking a particular wedding product or service from a particular vendor. To date, they have consistently found the latter be the more compelling. But one wedding vendor in Colorado is hopeful that such a trend won’t last.

On Wednesday, the Supreme Court granted writ of certiorari in another “wedding vendor” case. In 303 Creative LLC v. Elenis, the court will decide whether a state’s application of a nondiscrimination law, which would compel a website designer to create a website for a same-sex wedding, which she believes violates her sincerely held religious beliefs, violates her right to free speech under the First Amendment.

While past wedding vendor cases have focused on the free exercise clause, this case raises different arguments that the Supreme Court has not considered.

The petitioner, 303 Creative, had sought the Supreme Court’s review on two questions:

In Employment Division v. Smith, the Supreme Court held that free exercise of religion does not excuse an individual from having to comply with a valid and neutral law of general applicability. But the Supreme Court in 303 Creative LLC v. Elenis has decided to review only part of the first question, an outcome that might have been predicted based on the court’s recent reliance on and application of Employment Division v. Smith in the Fulton v. City of Philadelphia case decided just last term.

On July 26, 2021, the 10th U.S. Circuit Court ruled that Colorado’s Anti-Discrimination Act required Lorie Smith, the owner of 303 Creative, to create custom websites celebrating a same-sex marriage, even though it was a violation of her sincerely held religious beliefs.

The court applied strict scrutiny, the highest form of judicial review used by courts to determine the constitutionality of certain laws. Under this standard, courts must assess whether a law furthers a “compelling governmental interest” and is “narrowly tailored” to achieve that result.

In applying this standard, the court determined that Smith was both compelled to create a same-sex wedding website and was restricted from publishing her own views on marriage as between one man and one woman.

In the words of 303 Creative’s attorneys, this was where the court “went off the rails” by holding that Colorado’s Anti-Discrimination Act speech compulsion and speech restriction somehow satisfied strict scrutiny.

It somehow found a compelling government interest in ensuring that marginalized groups have “access to the commercial marketplace,” and at that same time, could compel Smith’s speech because it was “narrowly tailored” to Colorado’s interest in ensuring “equal access to publicly available goods and services.”

How did it get to that result?

By adopting an “artists are monopolists” theory—arguing that Smith’s unique website design services were distinct from design services available through other companies. That gave Colorado the right to force Smith to create custom wedding sites she ordinarily would not have because the state had a compelling interest in ensuring equal access not just to wedding website designers, but to specifically Smith’s design services.

As 10th Circuit Chief Judge Timothy Tymkovich’s dissent explained, that ruling was “unprecedented” and “staggering” in scope as one that empowered the government to force everyone to speak government-approved messages and “subvert[ed] our core understandings of the First Amendment.”

In holding that a government could “compel speech,” enforce “content-based restrictions” on speech that the government deems “unwelcoming,” and “force[ ]” artists “to create custom websites they otherwise would not”—even where that speech conflicts with sincerely held religious beliefs—attorneys for 303 Creative argue that the 10th Circuit deepened an existing conflict between federal courts on whether public officials can punish speakers with whom they disagree, and disregarded the Supreme Court’s long-standing free-speech precedents.

While the 10th Circuit and the Oregon Court of Appeals have ruled that public accommodation laws can on occasion compel speech, the 8th and 11th Circuit Courts have issued opinions reaching the opposite result. Still other courts interpret public accommodation laws to compel speech because they find the actions of wedding designers not to be speech at all, but instead, merely conduct (and therefore, undeserving of First Amendment protection).

Kristen Waggoner, general counsel at Alliance Defending Freedom, who is representing Smith, was encouraged after the court’s certiorari grant, saying, “The government doesn’t have the power to silence or compel creative expression under the threat of punishment. It’s shocking that the 10th Circuit would permit Colorado to punish artists whose speech isn’t in line with state-approved ideology.”

Waggoner continued, “Colorado has weaponized its law to silence speech it disagrees with, to compel speech it approves of, and to punish anyone who dares to dissent. Colorado’s law—and others like it—are a clear and present danger to every American’s constitutionally protected freedoms and the very existence of a diverse and free nation.”

It is high time the Supreme Court resolved this ongoing standoff between same-sex marriage and the First Amendment, so that vendors like Smith can earn a living while staying true to their religious beliefs.