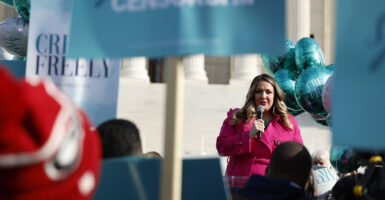 "The state of Colorado is censoring and compelling my speech and forcing me to create custom artwork, custom expression, that goes against the core of who I am and what I believe," says Lorie Smith, owner of 303 Creative, a website design company in Colorado, pictured outside of the U.S. Supreme Court on Dec. 5. (Photo: Anna Moneymaker/Getty Images)

WASHINGTON — The United States Supreme Court took up a momentous free speech case on Monday, one dealing with graphic designer Lorie Smith and her desire to speak and work consistent with her faith.

“I am a graphic and website designer from Colorado,” she shared. “I want to create and design for weddings. And I want to do that consistent with my faith.”

“But the state of Colorado is censoring and compelling my speech and forcing me to create custom artwork, custom expression, that goes against the core of who I am and what I believe,” Smith continued. “So the court heard the case today, I’m hopeful that the Supreme Court will stand to protect everyone’s right to create and speak consistent with their own beliefs.”

Asked how she was feeling after the momentous morning, she responded: “I’m feeling incredible, I’m just so grateful for this opportunity.”

Smith is represented by Alliance Defending Freedom. The organization’s president, Kristen Waggoner, told The Daily Signal on Monday that Smith’s case “involves whether all of us have the right of free speech.”

“Colorado has taken the position that it can compel all kinds of artists and speakers to say things they don’t believe,” she said. “That includes Lorie.”

“I hope the court issues a broad decision that protects all speakers,” Waggoner continued. “Many states have public accommodation laws and some states have up to 20 different categories in those laws. They’re sweeping, and a number of government officials are using them to compel people to say things that they just don’t believe.”

This is not only a threat to the personal rights of Americans, the Alliance Defending Freedom president warned — “it’s actually a threat to the principle of fundamental government and allowing authoritarian governments to tell people what ideas are worthy of celebration.”

Like Colorado Masterpiece Cakeshop owner Jack Phillips, who was taken to court for declining to create a wedding cake for a same-sex wedding, Smith’s faith causes her to hold to a traditional view of marriage between one man and one woman.

Smith is the owner of 303 Creative near Denver. She filed a lawsuit challenging a Colorado law that would force her to create custom wedding websites for same-sex nuptials, the same law used to punish  Phillips.

Smith’s case, Phillips’ case, and other similar court battles are “about the government’s responsibility to respect the right of each of us,” Phillips shared with The Daily Signal during a rally outside the Supreme Court Monday morning.

The Daily Signal’s Virginia Allen contributed to this report.