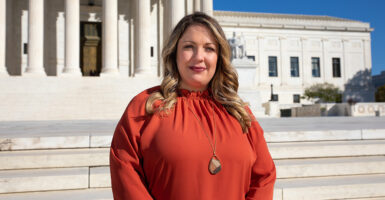 Similar to Colorado Masterpiece Cakeshop owner Jack Phillips, who was taken to court for declining to create a wedding cake for a same sex wedding, Lorie Smith’s faith causes her to hold to a tradition view of marriage between one man and one woman.  (Photo: Alliance Defending Freedom)

The Supreme Court is weighing in on a free speech case that could affect millions of Americans.

The high court heard oral arguments Monday for a case involving Colorado graphic designer Lorie Smith. Smith does not want to be forced to create custom wedding websites for same-sex weddings, but a Colorado public accommodations law would demand she do just that.

“I love people and create for everyone, including those who identify as LGBT,” Smith told reporters outside the Supreme Court following Monday’s hearing.

“Like other artists, my decision on what I create is custom and always based on the message, never about the person requesting the message,” Smith said. “There are some messages I can’t create no matter who requests them.”

Similar to Colorado Masterpiece Cakeshop owner Jack Phillips, who was taken to court for declining to create a wedding cake for a same-sex wedding, Smith’s faith causes her to hold to a traditional view of marriage between one man and one woman.

Smith is the owner of 303 Creative near Denver. She filed a lawsuit challenging a Colorado law that would force her to create custom wedding websites for same-sex nuptials, the same law used to punish  Phillips.

Smith’s case, Phillips’ case, and other similar court battles are “about the government’s responsibility to respect the right of each of us,” Phillips said during a rally outside the Supreme Court Monday morning.

Smith is asking the Supreme Court to allow her to promote her religious view that marriage is between one man and one woman without fear of facing retribution if she refuses to create a wedding website for a same-sex couple.

“Colorado is trying to force me to create custom, unique artwork to promote ideas inconsistent with my faith and the core of who I am,” Smith said.

Now, the Supreme Court will “decide whether the government can respect everyone’s freedom to say what we believe,” she added.

Attorney Kristen Waggoner, president and CEO of the Christian legal group Alliance Defending Freedom, argued on Smith’s behalf before the nine justices. Waggoner said Lorie’s case is about free speech because her client is asking for the right not be forced to create and promote messages that violate her beliefs.

“The messages she [Smith] declines, she declines regardless of who asks and regardless their status, it is always what the message is, not who the person is,” Waggoner said.

Waggoner said that the ruling in Smith’s case could affect not only artists in Colorado, but across America.

Smith filed her lawsuit against Aubrey Elenis, the director of the Colorado Civil Rights Division, who would enforce the law, so the case is called 303 Creative v. Elenis.

Should the justices rule in Smith’s favor, the high court would potentially be creating a dangerous loophole in the law, Colorado Attorney General Philip Weiser argued in brief remarks outside the Court.

“We are very concerned that if our side loses in this case, the Court would open up an exemption that would make possible all sorts of professions, photographers, people who make cakes, others who write books, to say, ‘I’m not going to sell to someone based on who they are.’”

The Supreme Court’s ruling in Smith’s case could “threaten the core of our civil rights laws,” Weiser said.

Smith’s attorney addressed a similar concern during her remarks, arguing that “public accommodation laws and the First Amendment can and do peacefully exist and will continue to do so if Lorie [Smith] wins.”

Protesters carrying gay pride flags demonstrated outside the Supreme Court while the arguments were heard inside the Court. Alliance Defending Freedom held rally in support of Smith in front of the Court.

The Supreme Court is expected to announce its decision on Smith’s case sometime between April and June 2023.

Smith told press she is not fighting for herself alone but for those who have “different beliefs” than her and for “each and every American, and our children’s children to think and create consistent, speak consistently, with the core of who they are.”