The Violent Attack on Paul Pelosi: Bring on the Left-Wing Hypocrisy 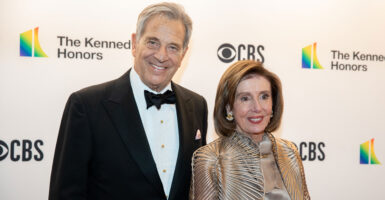 Days before the upcoming midterm elections, a hammer-wielding mentally ill man—who, according to the New York Post, was illegally in the U.S.—broke into the home of House Speaker Nancy Pelosi, D-Calif., and attacked her husband, Paul.

Mr. Pelosi suffered a fractured skull, underwent surgery, and is expected to make a full recovery. At the time of the attack, Speaker Pelosi was in Washington, D.C. The media claimed the attacker believed in “right-wing” conspiracies and, in a blog, criticized left-wing politics.

But the New York Post wrote: “[The attacker] lived with a notorious local nudist in a Berkeley home, complete with a Black Lives Matter sign in the window and an LGBT rainbow flag, emblazoned with a marijuana symbol, hanging from a tree.” So, there is a lot we do not know of the attacker now in custody. Authorities have not yet publicly offered a motive.

The media and Democrats immediately connected the attack to the alleged “hateful political rhetoric” of “MAGA Republicans,” the leader of whom is, of course, the reviled-by-the-Left former President Donald Trump.

An op-ed in the left-wing Washington Post said: “Pelosi—whom Republicans have long demonized as the face of progressive policies and who was a target of rioters during the Jan. 6, 2021, attack on the U.S. Capitol—emerged as the top member of Congress maligned in political ads, with Republicans spending nearly $40 million on ads that mention Pelosi in the final stretch of the campaign, according to AdImpact.”

The chairwoman of the Republican National Committee said: “This is a deranged individual, you can’t say people saying, ‘let’s fire Pelosi’ or ‘let’s take back the House’ is saying ‘go do violence.’ It’s just unfair.”

So, by making Pelosi the face of the Democratic Party, Republicans encouraged violence against her and her family? Sigh.

If a mentally ill intruder broke into Mar-a-Lago and struck Trump in the head with a hammer, not only would the Trump-deranged Left barely contain their laughter and glee—for they’d deem it retribution, as they felt when Trump contracted COVID-19—they’d recruit the thug for Congress.

Where was the media and their fellow Democrats when longtime Rep. Maxine Waters, D-Calif., said about Trump Cabinet members: “If you see anybody from that Cabinet in a restaurant, in a department store, at a gasoline station, you get out and you create a crowd and you push back on them, and you tell them they’re not welcome anymore, anywhere.”

Where was the media and their fellow Democrats when, during the Trump administration, then-Senate Minority Leader Chuck Schumer, D-N.Y., stood outside of the Supreme Court Building and, referring to Trump’s court nominees Brett Kavanaugh and Neil Gorsuch, said: “I want to tell you, Gorsuch. I want to tell you, Kavanaugh. You have released the whirlwind and you will pay the price. You won’t know what hit you if you go forward with these awful decisions.”

Is there a connection to the deaths of these officers and Obama’s rhetoric on cops and race—from “the Cambridge police acted stupidly,” to racism is in America’s “DNA,” to embracing the anti-cop group Black Lives Matter, an organization that promotes the lie of anti-black police “systemic racism,” to welcoming the race-hustling Rev. Al Sharpton to the White House over 80 times, to pushing the “hands up, don’t shoot” Ferguson lie in a speech before the U.N., to “if I had a son he’d look like Trayvon”? Is there blood on Obama’s hands?

About the attack on Paul Pelosi, Obama condemned politicians who “stir up division to make folks as angry and as afraid of one another for their own advantage.” Yet Obama was silent when his ex-Veep, now-President Joe Biden, recently claimed backers of Trump supported “semi-fascism”?

None dare call this yet another classic case of left-wing hypocrisy, double standards, and selective outrage.