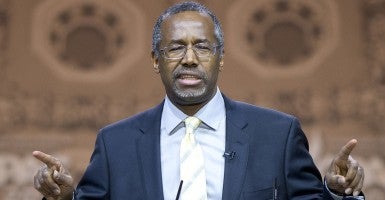 As he predicted, Ben Carson yesterday drew stark headlines by making a fanciful comparison of the steadfastness of Revolutionary War patriots to that of the terrorist group ISIS.

“They were willing to die for what they believed in,” @RealBenCarson says.

Exhorting his listeners not to abandon conservative principles, Carson recalled the dark days of the American Revolution:

Carson then referred to ISIS, the brutal Islamist force also known as the Islamic State or ISIL, as he added:

Fast forward to today. What do we have? … ISIS. They’ve got the wrong philosophy, but they are willing to die for what they believe, while we are busily giving away every belief and every value for the sake of political correctness. We have to change that.

The remarks drew some applause. Before long, media outlets ranging from CNN to NBC to Yahoo moved stories from the RNC meeting focused on Carson’s provocative comparison.

Carson said he expected the media to exaggerate his rhetorical point, arguing some reporters routinely twist his meaning to fit a “craziness narrative.”

“They are just so ridiculous,” he said.

RNC Chairman Reince Priebus later told NBC that Carson was talking about the importance of fighting for a cause.

“I think he was making a point, and I think his point was to stand up for the things that you believe in,” Priebus said.

Last night, Wisconsin Gov. Scott Walker also spoke to the RNC audience. Little more than a week after being sworn in for a second term and two days since his State of the State address, Walker said he is “worried about our country” and signaled his interest in getting into the Republican race for president.

We need someone who hopefully has the backing and the track record of success, of showing that common-sense conservative reforms can work not just in Wisconsin, but they can work all across America.

The party’s 2012 nominee, Mitt Romney, was scheduled to speak to RNC officials tonight amid the media buzz about the former Massachusetts governor’s stated interest in making a third bid for the White House.

Carson, whose forthrightness has been embraced by tea party conservatives even as it makes establishment figures nervous, suggested he knew he would spark a hullabaloo with unguarded remarks:

I will confess that I do not have experience in certain things like empowering special interest groups and growing the government and wasting taxpayer money and disarming our military and deserting our allies and lying to the people and submitting to the PC [political correctness] police.

Carson, 63, also touched on how his transition to the Republican Party began when he first heard Ronald Reagan’s speeches more than 35 years ago – although he grew up being told Republicans were “evil, racist people.”

“That guy makes a lot of sense,” he recalled thinking of Reagan, “and I don’t see horns growing out of his head.”