Marco Rubio on ‘Why We Want Tax Reform’ 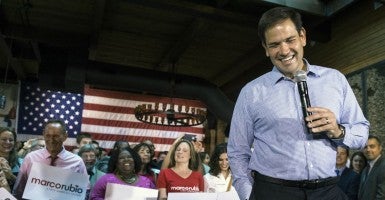 Sen. Marco Rubio, R-Fla., during a meet and greet with voters in Cleveland, Ohio on August 5, 2015 (Photo: Kevin Dietsch/UPI/Newscom)

Rubio, speaking at the RedState Gathering along with several other Republican presidential candidates, said that America should be “the best place in the world to create jobs.”

He said that taxes should be lowered on “all business, especially small businesses.”

“That’s why we want to have a tax code that says the more people you hire, and the more you invest in your company, the less you’ll owe the IRS,” Rubio said. “That’s why we want a tax code that says if you’re an American company, and you’ve got millions of dollars overseas that you’ve made in another country, we want you to bring that money back and we won’t double tax you.”

“That’s why we want tax reform,” Rubio added. “Because it makes us the best place in the world to create those jobs.”
Rubio added that “devastating” regulations also stifle job creation and entrepreneurship.

“That’s why we want regulatory reform,” Rubio added. “Because we know that the more regulations, the less innovation. The more regulations there are, the harder it is for someone to start a new business out of the spare bedroom in their home.”

Rubio said that in order to foster job growth “we have to repeal and replace Obamacare.”

“Replace it with a system that empowers the individual,” Rubio said. “Replace it with a system that says from now on, every American will be able to use tax-free money – whether it’s a tax credit, or your own money or money your employer gives you – and you will be able to use it to buy health insurance across state lines, of the kind you want, from any company in America that will sell it to you.”

He also said that the federal budget must be balanced.

He called the federal deficit “the most predictable crisis in American history.”