Report Says GDP Is Up, but the Underlying Truth Is More Disturbing, Economist Warns 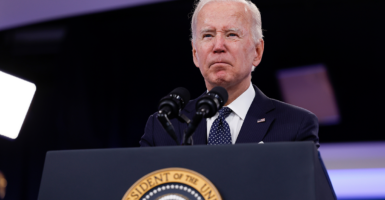 Gross domestic product increased by a 2.6% annual rate in the third quarter of 2022, according to a U.S. Bureau of Economic Analysis report released Thursday. Pictured: President Joe Biden delivers remarks on the economy Wednesday in the Eisenhower Executive Office Building in Washington. (Photo: Anna Moneymaker/Getty Images)

Gross domestic product, or GDP, increased by a 2.6% annual rate in the third quarter of 2022, according to a U.S. Bureau of Economic Analysis report released Thursday.

“Far from an indicator of growth, today’s GDP report signals decline. Consumer spending and business investment combined actually contributed -0.62 percentage points to GDP,” EJ Antoni, a research fellow for regional economics in the Center for Data Analysis at The Heritage Foundation, told The Daily Signal in a statement. (The Daily Signal is Heritage’s multimedia news organization.)

“Americans are steadily becoming poorer under Biden and in the third quarter were able to afford fewer imports from abroad,” he said.

Because of the way GDP is calculated, this actually adds to the headline growth number temporarily. All of GDP growth last quarter was due to this decline in imports and an increase in exports.

Consumer spending and business investment combined were negative for the quarter, indicating American families and businesses alike continue being squeezed by higher prices and falling real incomes and savings.

“For months, doomsayers have been arguing that the US economy is in a recession and Congressional Republicans have been rooting for a downturn. But today we got further evidence that our economic recovery is continuing to power forward,” President Joe Biden said in a statement.

Our economy has created 10 million jobs, unemployment is at a 50 year low, and U.S. manufacturing is booming. Today’s data shows that in the third quarter, Americans’ incomes were up and price increases in the economy came down.

The next GDP report for the third quarter will be released on Nov. 30 at 8:30 a.m. EST, and it will include more data, according to today’s report.

The consumer price index rose 0.4% in September, showing that inflation remained at a near four-decade high of 8.2%, the U.S. Bureau of Labor Statistics reported earlier this month.

At the time, Biden touted “progress” despite a key inflation number reaching a 40-year high, The Daily Signal previously reported.

“Today’s report shows some progress in the fight against higher prices, even as we have more work to do. Inflation over the last three months has averaged 2%, at an annualized rate. That’s down from 11% in the prior quarter,” the president said.

“But even with this progress, prices are still too high. Fighting the global inflation that is affecting countries around the world and working families here at home is my top priority,” Biden added.