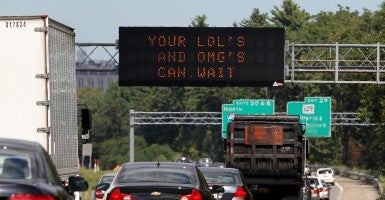 Massachusetts chose to post this message on their electronic highway billboards targeting drivers who feel the need to text and drive. (Photo: Newscom)

Police may soon have new technology to help them identify texting drivers.

A Virginia-based company called ComSonics is developing a detection device resembling a radar gun that can pick up the distinctive radio signals generated by texting, according to the Virginian Pilot. Being able to distinguish between a phone call and a text would be useful for police in states like Virginia, where it is legal to talk on the phone while driving, but not to text.

The device is currently in production and has several potential flaws that ComSonics is still addressing – such as determining which person was texting in a car with more than one passenger.

“Police have an obligation to make sure the roads are safe,” said Andrew Kloster, a legal fellow at The Heritage Foundation. “And states generally have the authority to pass laws that prohibit you from driving while doing things that might impair your driving. This seems like a reasonable effort to do so.”

Kloster is not concerned about privacy issues, but did raise another concern.

“It’s not really a privacy issue since they’re looking at the fact that you texted rather than what you texted. In my mind, the bigger question is an evidentiary one. If I’m driving, and my wife sends a text message on my phone, and I’m pulled over, what happens then?  I don’t think that would be good enough evidence to get a conviction.”

Jordan Richardson, a visiting legal fellow at The Heritage Foundation, raised another concern.

“In an age where the police have been caught using ticket quotas, this would give them an additional excuse to pull over drivers,” said Richardson.

According to CBS, the device is not yet in production because the company is still waiting for “legislative approval and a commitment from law enforcement.”