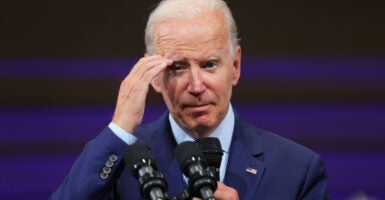 President Joe Biden recently gave a speech in Wilkes-Barre, Pennsylvania, touting his “Safer America Plan” and a gun control bill he had signed into law.

For many American gun owners, these speeches on preventing gun violence so obviously have become stump speeches for gun control that they no longer tune in, unable to bear cringey zingers about “deer in Kevlar vests” and blatantly false “gun facts.”

But don’t worry—I listened to the president’s Aug. 30 speech so that you didn’t have to.

Here are the top 5 most unserious things Biden said about guns and the Second Amendment:

Biden has made some variation of this assertion numerous times since taking office as president, and every time it has been roundly debunked by fact-checkers.

Private cannon ownership apparently was so widespread that one of the first types of “gun control” laws implemented in the early 1800s by some towns was a prohibition on firing one’s cannon inside city limits during certain times or without permission.

Today, it’s still not uncommon for civilians to own heavy ordnance, including 18th-century cannons and their modern equivalents. In fact, civilians even may buy tanks and other tactical military vehicles if they can afford the steep price tags. (But fair warning to would-be tank owners: Many places won’t consider your tank “street legal,” and you’ll be able to drive it only on private property.)

It’s also simply not true that civilians can’t legally buy machine guns today. These firearms are subject to special taxing and registration provisions under the National Firearms Act, and the Firearm Owners Protection Act prohibits civilian ownership of machine guns manufactured after 1986. Nevertheless, over 700,000 of them currently are registered to American civilians.

2. “Do you realize the bullet out of an AR-15 travels five times as rapidly as a bullet shot out of any other gun, five times lighter and can pierce Kevlar?”

A simple internet search by an intern could have told the president that this statement about an AR-15’s muzzle velocity and weight was laughably false.

Although a .223/5.56 bullet—the most common caliber for an AR-15 platform—is certainly among the lighter and faster of rifle rounds, it’s not even close to the lightest or fastest, much less five times faster or lighter.

Several important factors will affect muzzle velocity, including the weight of the bullet (also known as the bullet’s “grain”) and the length of the barrel from which it is fired. A typical .223/5.56 round fired from an AR-15 with a standard 16- to 20-inch barrel generally will have a muzzle velocity between 2,800 and 3,300 feet per second at the moment it leaves the barrel.

Many other rifle calibers will fall within that velocity range, again depending on the grain of the bullet and the barrel length of the firearm. This muzzle velocity also pales in comparison to the average velocity of rounds such as the .220 Swift, which generally will travel between 4,000 and 4,300 feet per second.

Even if it were true that a .223/5.56 round travels far faster than other caliber, muzzle velocity is not synonymous with “lethality” or “stopping power.” A faster bullet doesn’t necessarily mean a deadlier bullet or even necessarily more “carnage”—as anyone who has seen the devastating power of a shotgun blast at close range will attest.

The AR-15’s alleged (but fictional) super-lethality is also just a poor basis for banning so-called assault weapons. These bans don’t define “assault weapons” based on caliber, muzzle velocity, or any other functional measure, but on the presence of features such as pistol grips, barrel shrouds, and collapsing stocks.

How would banning AR-15s with these features lessen their muzzle velocity or alleged “deadliness”? The answer: It wouldn’t.

As for Biden’s claim that rounds fired from an AR-15 can “pierce Kevlar,” this is true of almost all common rifle calibers against soft body armor, which is not typically graded to stop rifle rounds.

3. “For God sake [sic], what’s the rationale for these weapons outside of a war zone? They inflict severe damage … the AR-15 just rips the body apart.”

Biden can’t really believe that AR-15s are solely useful for combat. If he did, he and other gun control advocates wouldn’t universally exempt law enforcement officers from these bans (including while the officers are off duty).

In the United States, law enforcement officers aren’t waging offensive warfare or engaging in open combat on a battlefield. Instead, they are peace officers, responding to common criminal threats in a civilian context. They routinely carry AR-15s precisely because these guns are genuinely useful for a wide variety of lawful civilian purposes.

The president’s appeal to the horrific school shooting in Uvalde, Texas, as evidence of the AR-15’s ability to “inflict severe damage” on the human body is horribly misguided.

As should already be clear at this point, rounds fired from an AR-15 don’t have a particularly devastating effect compared to either other types of rifle rounds or to the exact same round fired from a “nonassault weapon.” As difficult as it is to consider, not a single child in Uvalde would be any less dead or any less horribly maimed had the gunman used a shotgun, handgun, or “nonassault” rifle under the exact same circumstances.

4. “For those brave right-wing Americans who say it’s all about keeping America independent and safe, if you want to fight against the country, you need an F-15 … You need something more than a gun.”

This is an odd assertion for the president to make after dedicating so much time to the mutually exclusive argument that AR-15s are ultra-deadly weapons of war and useful only for combat purposes.

Either the gun is a useless hunk of carbon fiber without any value in a hypothetical armed defense against a tyrant’s military forces, or it is a war zone weapon that should be limited to the battlefield. It cannot be both at the same time.

More importantly, Biden’s argument misunderstands how any large-scale armed defense against a tyrannical government or foreign invader would unfold and underappreciates the role of federalism in ensuring a far more adequate response to such a scenario.

The Framers well understood that an armed but disorganized citizenry alone might struggle against a large standing army under the control of a tyrannical central power. This is precisely why every state has its own organized militia unit, in the form of its State Guard and National Guard units.

In other words, although the body of armed citizens (constituting the unorganized militia) creates an incredibly valuable foundation for resisting tyranny, these citizens are not the sole mechanism for it.

5. “There are certain gun dealers that are basically … not gun dealers, they’re wholesalers providing the weapons to anybody who has the money.”

Is Biden alleging that these “gun dealers” are breaking federal law, either by failing to obtain a Federal Firearms License or by failing to abide by laws requiring such licensees to conduct background checks on firearm purchasers?

If so, the president, as chief executive, should direct federal law enforcement agencies to do their jobs, investigate this alleged criminal noncompliance, and ensure these criminals are prosecuted to the fullest extent of the law.

But if Biden is not suggesting that these gun sellers are breaking the law, it’s not clear why he seems to hold such disdain for them selling their products in compliance with state and federal regulations.

By definition, if these transactions are conducted lawfully, the prospective buyer passed a federal background and took possession of a firearm that he was permitted to own under all relevant state laws.

Does the president believe that gun stores should act unilaterally to deny law-abiding citizens the exercise of their constitutional rights? Should they not sell to “certain” customers for arbitrary reasons, despite their ability to pay?

Biden never has shown himself to be a particularly serious person when it comes to guns, gun violence, or the Second Amendment.

But this, perhaps, was his most unserious speech yet on these issues.

If Biden really were concerned with saving lives, he would have been in Philadelphia—a city wracked by three straight years with record levels of violence—denouncing rogue prosecutors and detailing his plans to combat “straw” purchasing of firearms.

Instead, Biden was in Wilkes-Barre, arguing that law-abiding citizens should be stopped from buying more of the nation’s most commonly owned rifles because, after all, what’s the point of those rifles when he could just carpet-bomb them into compliance.

At least we’ve now been duly reminded of the dangers posed by large standing armies.