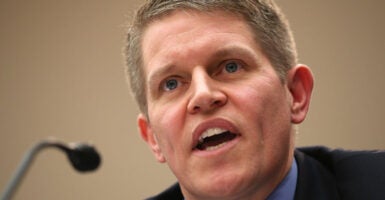 When President Joe Biden released his plan in February to tackle gun violence, he also announced the nomination of David Chipman to head the Bureau of Alcohol, Tobacco, Firearms and Explosives, or ATF.

Chipman’s nomination as ATF director raised immediate concerns from Second Amendment advocates, many of whom see it as a slap in the face to the nation’s tens of millions of responsible gun owners.

Chipman—a longtime ATF agent who now is a gun control lobbyist—is well known for advocating severe restrictions on the constitutional right to keep and bear arms. He also made headlines last year by brazenly mocking the 8 million Americans who bought firearms for the first time in 2020, implying that they were afraid of zombies and comparing them to “Tiger King.”

At his recent confirmation hearing before the Senate Judiciary Committee, Chipman walked back some of those condescending comments, explaining them away as attempts to be “self-deprecating”—a curious choice of framing on which he didn’t elaborate.

He also assured senators that he believes the Second Amendment protects an individual right and that the Supreme Court’s decision in District of Columbia v. Heller, a foundational Second Amendment case, was correct.

But Chipman’s testimony also amplified many of the original concerns about his nomination. He doubled down on his support for banning commonly owned semiautomatic firearms, and in the process relied on blatant misinformation and obfuscation—not the first time he has done so.

In the end, those are not the qualities anyone should want to see in the potential head of a federal agency.

During his confirmation hearing May 26, Chipman once again exhibited a propensity toward misstating facts and repeating false claims.

When pressed over his support for banning so-called assault weapons, he justified his position by declaring that the AR-15 is “a particularly lethal weapon.” This is objectively incorrect.

That’s because so-called assault weapons are not defined based on factors that affect a gun’s lethality. When gun control advocates talk about banning assault weapons, they never bother to point out that they mean banning guns above a certain caliber, muzzle velocity, muzzle energy, or any vague notion of “stopping power.”

Instead, the factors that turn a gun into an assault weapon are largely cosmetic and comfort-based.

Features such as pistol grips, collapsing stocks, and forward grips allow shooters—including the tens of millions of responsible gun owners using these weapons for lawful purposes—to handle the gun more comfortably. Features such as barrel shrouds protect shooters from accidentally burning themselves when the gun’s barrel becomes hot during use.

But remove these features and you still have a firearm that will function in the same way, ejecting the same caliber bullet with the same energy and velocity to cause the same amount of damage.

Put aside the reality that—as the high court said in Heller—these assault weapons are the very types of guns “commonly used by law-abiding citizens for lawful purposes” that lie at the core of the Second Amendment protection.

Put aside, too, the fact that the very point of a firearm, whether for self-defense, hunting, or war, is to effect lethal force.

One simply cannot argue, with any shred of intellectual honesty, that AR-15s with pistol grips or barrel shrouds must be banned because they are uniquely lethal, but AR-15s without those features are fine.

As a longtime ATF agent who no doubt is familiar with firearms, Chipman knows better than to make this claim. He made it again, anyway.

Chipman also asserted that the 1993 federal ban on assault weapons, which Congress allowed to expire in 2004, had “mixed results.” Actually, there was nothing “mixed” about the results at all.

The official 2004 study on the results of the ban concluded that the drop in gun violence that occurred could not be credited to the ban itself, and that “should it be renewed, the ban’s effects on gun violence are likely to be small at best and perhaps too small for reliable measurement.”

Subsequent studies routinely found that these types of bans bear no statistically meaningful relationship to changes in firearm homicide rates, including where—as in Australia—they involve confiscation and not just bans on future sales.

Indeed, if it had been the case that Americans’ temporary inability to buy guns with pistol grips and barrel shrouds “caused” the decline in violence, we would have expected to see gun violence skyrocket after the ban expired and Americans began buying these guns by the millions.

But that’s not at all what happened. Gun homicide and gun crime rates continued to fall, eventually leveling out and remaining at consistently low levels.

This makes perfect sense, given that these types of weapons rarely are used to commit crimes, and most crimes involving these guns (including mass public shootings) can be just as easily committed with “nonassault weapons.”

No one can be an expert on everything.

But maybe, just maybe, if you advocate banning certain types of weapons and want to head the agency that ultimately would be tasked with enforcing any such ban, a basic requirement should be an ability to define that class of banned weapons.

Chipman either could not or would not do so during the hearing, when asked by Sen. John Kennedy, R-La., to define “assault weapon.”

It’s not entirely clear which scenario would be worse.

If Chipman is incapable of defining “assault weapon,” it shows a level of gross incompetence that should immediately disqualify him from confirmation as ATF director.

If, as is more likely the case, he actually can define “assault weapon” but refused to do so publicly, it’s hard to see it as anything but a tactical smokescreen to avoid revealing the truth about such bans.

Defining assault weapon means describing scary-looking features unrelated to the gun’s functionality. Chipman would have been forced to admit that the differences between the guns he would ban and the guns he would not ban are not differences in lethality, at all. Then he would have found himself in the quite embarrassing place of having just undone his entire premise for the ban he supports.

Regardless of whether Chipman’s answer was incompetence or a tactical smokescreen, the lack of a coherent answer raises giant red flags.

No, if he becomes ATF director, David Chipman can’t unilaterally impose his bad policy preferences on the American people. Only Congress could draft and pass a federal ban on certain types of firearms, and only the president can sign that bill into law.

But executive branch agencies such as the ATF are given tremendous leeway in creating regulatory rules and interpreting the laws they’re supposed to enforce. The head of the Bureau of Alcohol, Tobacco, Firearms and Explosives helps set the agency’s priorities and the general perspective with which it approaches enforcement.

Chipman says he believes that I have an individual right to keep and bear arms. And I’ll take him at his word that this is, in fact, what he believes.

But it’s also clear that he believes I only barely have this right, and only with respect to the less “firearm-y” types of firearm he thinks are appropriate for me.

He advocates policies that would limit my right to keep and bear arms yet are unlikely (indeed, incapable of) reducing gun violence. And he’s willing to misstate facts and obfuscate truth in the process of making these policies a reality.

At the end of the day, those aren’t the qualities of someone who should lead the ATF.