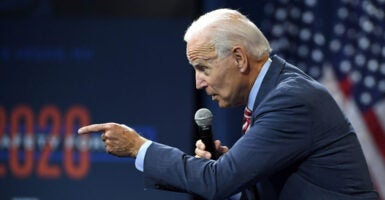 When President Joe Biden announced a plan in mid-February to “tackle gun violence,” he said he would direct the Justice Department to issue new regulations for so-called ghost guns.

The Justice Department last week finally made public what those new rules would be, setting off a flood of commentary on a technical and oft-misunderstood topic.

So what are ghost guns? Why does it seem like everyone suddenly is talking about them? What effect would the new rules have on gun owners?

And, most importantly, are these changes something Biden can do without congressional action?

What Are ‘Ghost Guns?’

The term “ghost gun” refers to a firearm that isn’t marked with an individualized serial number, either because that number has been obliterated illegally or because the firearm is exempt from federal laws that generally require those markings.

Law enforcement officers often use serial numbers to track guns associated with crimes back to their point of purchase or last known lawful owner.

Firearms without serial numbers are ghost guns in the sense that there are no official records of their existence.

Most commonly, however, the term is used to mean a specific type of unmarked gun—those made by private individuals for personal use, often using a variety of prefabricated or partially unfinished firearm parts. In other words, most ghost guns are just homemade firearms.

Federal law doesn’t regulate the manufacture and sale of every firearm part. It regulates “firearms,” defined as “a weapon which will or is designed to or may be readily converted to expel a projectile by the action of an explosive,” including the weapon’s “frame or receiver.”

What is a firearm “frame or receiver,” and why is it so important that Congress decided to regulate it just as it would a completed firearm?

Congress didn’t define “frame or receiver” in any statute, but the Bureau of Alcohol, Tobacco, Firearms and Explosives long ago created rules defining the frame or receiver as “the part of a firearm which provides housing for the hammer, bolt or breechblock and firing mechanism, and which is usually threaded at its forward portion to receive the barrel.”

In layman’s terms, a gun’s frame or receiver is a hunk of shaped and drilled-out metal that ultimately will house the parts that make the gun fire when it’s all put together.

You can buy or sell any other individual part of a firearm just as easily as you could a bar of soap. But not so with the frame or receiver.

Any person or entity “engaged in the business” of manufacturing or selling firearms—including frames or receivers—has to be licensed by the the Bureau of Alcohol, Tobacco, Firearms and Explosives, or ATF, as a federal firearms licensee.

Federal firearms licensees are subject to a plethora of regulatory burdens: Their firearms must be marked with individualized serial numbers; they must keep extensive records of all firearm sales or transfers; and they must conduct background checks on all prospective firearm purchasers.

But Americans who want to build firearms for their own personal use don’t have to become firearms licensees and aren’t subject to those stringent regulations. It’s still illegal for a prohibited person to make a firearm for personal use, or for these unlicensed private gunmakers to “engage in the business” of selling their guns to others.

Americans have a long and proud history of private gunsmithing. We’ve always been tinkering with our guns in our garages. Why are homemade guns suddenly an issue?

As has been the case throughout history, most home gunsmiths today are more “gunbuilders” than “gunmakers,” assembling a variety of largely premade parts into a custom weapon. Generally, this type of assembly requires some degree of skill, special tools, and time, especially when starting with a “blank” (completely solid) frame or receiver.

But with the advent of 3Dprinting, online tutorials, and a tremendous growth in the number of manufacturers selling partially finished frames and receivers (known as “80% receivers” because they’re about 80% completed), homemade gunbuilding has become increasingly easier and more accessible for the average American.

Additionally, some manufacturers now sell “gun kits” that contain not just partially finished frames or receivers, but all the other components or tools necessary for a relative novice to build a functional firearm in a single afternoon.

Nothing in these kits technically comprises a firearm—or a frame or receiver—at the time the kit is sold, so federal law doesn’t require the parts to have serial numbers or that buyers undergo background checks.

The fear is that those prohibited from buying guns nonetheless may purchase these all-in-one kits and possess an operable firearm by the end of the day, while bypassing a background-check system designed to keep guns out of their hands. Further, because these kit guns don’t have serial numbers, it’s harder for police to find leads in criminal cases in which these guns are used.

What New Rules Would Do

Among other things, the new rules would expand the definition of “frame or receiver” to include any part of a gun that can house even one mechanism of the firing process. They also would regulate partially completed frames and receivers when sold in “weapons parts kits” containing all of the tools necessary to assemble a firearm.

This essentially means that many gun kits and “80% receivers” now would be regulated the same as fully functional firearms and finished receivers: They couldn’t be sold without a serial number or without the buyer undergoing a background check.

Those kits presumably would still be available for purchase, but no longer could be mailed to your door via the internet. Like firearms, the kits could be paid for online, shipped to a brick-and-mortar firearms licensee, and picked up in person after completion of a background check.

The proposed regulation would not impose additional requirements on unlicensed private gunmakers who build guns for personal use. It would impose new burdens, however, on firearms licensees who take in unmarked homemade guns and now would have to “mark” those homemade guns with a serial number, record those marks with the ATF, and maintain records of the ensuing transactions, just like they would with a commercially manufactured gun.

There certainly are questions about whether aspects of the proposed rules constitute good policy. The rules certainly would upend over a century of common understanding and agreement about what constitutes a gun’s frame or receiver, based on dubious claims that these definitions are outdated.

The new definition also could lead to absurd realities where homemade guns end up with multiple serial numbers stamped throughout different parts of the firearm.

But those policy questions pale in comparison to the legal question of whether the ATF can impose these changes in the first place.

In our system of government, executive branch agencies such as the ATF are tasked with enforcing laws written and passed by Congress. Agencies necessarily must “interpret” and “apply” the laws they’re supposed to enforce, and courts give considerable deference to these interpretations.

When Congress passed the Gun Control Act of 1968, it specifically regulated firearms, including the frame or receiver. As renowned Second Amendment scholar Steven Halbrook has noted, “In ordinary nomenclature, a frame or receiver is a finished part which is capable of being assembled with other parts to put together a firearm.”

Yet the ATF’s new rule in effect would change that law to allow for the regulation of “almost-frames” or “almost-receivers.”

Congress simply did not give the Bureau of Alcohol, Tobacco, Firearms and Explosives the authority to drastically alter the plain meaning of statutes, or to regulate partially finished frames or receivers that require more drilling or machining on the part of the person assembling the gun. And the ATF is not constitutionally permitted to grant itself that authority, regardless of how good of an idea the agency may think it is to do so.

It may well be good policy, as some have argued, to mandate background checks on IKEA-style build-a-gun kits, even though we know this isn’t how the majority of would-be criminals acquire their guns.

It also might be easier for law enforcement agencies to track down perpetrators of gun crime if fewer parts are sold without serial numbers to private gunmakers.

And it even could be the case that the new rules are a reasonable way to regulate gun kits while allowing Americans to build their own guns at home.

But implementing this policy, whether sensible or not, requires that an existing statute be rewritten or that a new statute be enacted, which are not powers the Constitution grants to unelected bureaucrats at the ATF.