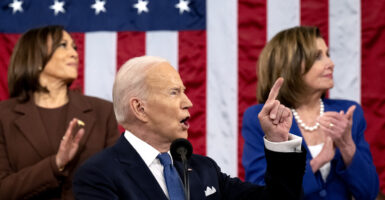 With one breath, President Joe Biden praised the Ukrainian people for taking up arms to defend democracy, and with the next he mocked millions of gun-owning Americans, asking whether they thought “deer are wearing Kevlar vests.” Pictured: Biden delivers his first official State of the Union address March 1, flanked by Vice President Kamala Harris, left, and House Speaker Nancy Pelosi. (Photo: Saul Loeb /Pool/Getty Images)

In his first State of the Union address, President Joe Biden doubled down on his administration’s efforts to undermine the Second Amendment rights of law-abiding citizens.

Biden once again called on Congress to repeal a measure, the Protection of Lawful Commerce in Arms Act, which ensures that groups advocating gun control can’t kneecap a lawful industry by intentionally bogging it down in expensive but baseless lawsuits.

Echoing the plan to tackle gun violence that his administration released in February 2021, the president repeated hackneyed demands for Congress to pass “universal background checks” and ban “high-capacity magazines.”

Incredibly, with one breath Biden praised the Ukrainian people for taking up arms to defend democracy, and with the next he mocked the millions of Americans who own lesser versions of those same arms, asking whether they thought the “deer are wearing Kevlar vests.”

What Biden fails to understand is that the Second Amendment is not premised on hunting, but on our ability to defend against assaults on our inalienable rights—regardless of whether the assaults are carried out by foreign invaders, a tyrannical government, or criminals. And the right to keep and bear arms is nothing to mock in a well-armed country.

For this reason, The Daily Signal each month publishes an article highlighting some of the previous month’s many news stories on defensive gun use that you may have missed—or that might not have made it to the national spotlight in the first place. (Read other accounts here from 2019, 2020, and 2021.)

Time and again, lawful gun owners demonstrate the benefits of being well-armed and capable of defending themselves, their communities, and (in extreme circumstances) their nation from assaults on their inalienable rights.

It’s well past time for Biden to understand why tens of millions of Americans exercise their right to keep and bear arms, including the ones he irrationally believes are too scary-looking to receive constitutional protection.

It’s not because deer might wear Kevlar vests, Mr. President.

It’s because of violent ex-lovers, gun-toting robbers, and desperate fugitives, and other criminals who would harm these Americans.

It’s because peace is a fragile thing, too often shattered by armor-plated tanks and jackbooted soldiers.

It’s because history shows us that a well-armed people are harder to oppress, harder to conquer, and harder to kill.