The Media Avoids Every Biden Fiasco 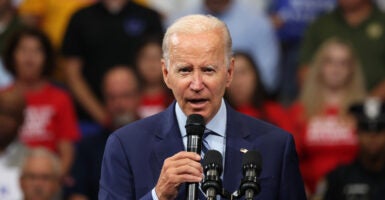 On those rare occasions when there was Afghanistan coverage from the corporate media, the words "Joe Biden" were often missing from the bad news. Pictured: President Biden speaks Aug. 30 in Wilkes-Barre, Pennsylvania. (Photo: Michael M. Santiago/Getty Images)

If you never looked at a poll and watched only the network news to stay informed, you might think Joe Biden is a very successful and popular president.

That’s not an accident. There’s a lot of well-designed embroidery and energetic omissions. They pretend Biden has never mismanaged anything or caused a single problem in America.

Take the Afghanistan fiasco. The networks couldn’t completely ignore the mess, but they tried. Scott Whitlock at NewsBusters looked at the evening news coverage day by day and month by month.

The fall in the amount of coverage was quick and steep. August 2021’s total of 409 minutes fell to 92 in September and 16 minutes in October. By November, ABC’s “World News Tonight,” “CBS Evening News,” and “NBC Nightly News” managed just over 10 minutes of coverage for the ongoing disaster between them.

Afghanistan has seemed nearly absent in 2022, with only 19 minutes and 45 seconds of coverage over the first seven months of the year. That’s not even three minutes a month on the three networks combined.

In July, there was only seven seconds. In just a fraction of an ABC story on veterans, one service member noted, “Everyone I knew in the veteran community had a mental breakdown when Afghanistan fell.”

It’s also important to note that on those rare occasions when there was Afghanistan coverage, the words “Joe Biden” were often missing from the bad news.

On Jan. 28, 2022, NBC anchor Lester Holt warned, “Five months after the chaotic U.S. withdrawal, a humanitarian disaster is unfolding.” Reporter Kelly Cobiella warned, “On the streets, people are desperate. Some selling their kidneys for cash … Meanwhile, Americans are still stranded here along with thousands of America’s Afghan allies.”

Over on ABC, anchor David Muir described “children on the edge of starvation, a 2-year-old weighing just 11 pounds. And with the Taliban now in control, ISIS is now taking aim at them.”

Biden’s name never came up in these horror stories.

Then try the crisis at the southern border. Journalists were warned not to use the word “crisis.” Here again, Whitlock’s evening news calculations found that from July 2021 through June 2022, ABC, CBS, and NBC allowed just 146 minutes of evening news coverage to the border surge.

Over a full year of three network evening newscasts a night, that comes out to less than 1% of the airtime. During that same time, the government tallied 2,362,238 border crossings.

In three separate months, the pro-Biden networks allowed no time at all. In five other months, the ABC, CBS, and NBC newscasts managed 10 minutes or less of coverage between them.

Even the deadliest human smuggling incident in U.S. history was a two-day story. On June 27, 65 immigrants were left to die, packed into a tractor trailer in sweltering Texas heat. Almost no one survived. Yet the network evening newscasts covered it for just 13 minutes and 57 seconds. Of that, only 48 seconds hinted at any blame for the president’s border policies.

We’re a long way from the media bias of the Trump years, when The New York Times wrote sob stories with headlines like “Fearful Migrants Stop Short of U.S.” and NBC complained Donald Trump’s “hardline immigration policies are causing gut-wrenching pain for some families.”

The nightly “news” can be described with quote marks because of its amazing elasticity. Our commissars of evening information at ABC, CBS, and NBC carefully script the narrative like a propaganda ministry. Biden Chief of Staff Ron Klain should buy them all a round of beers every night.