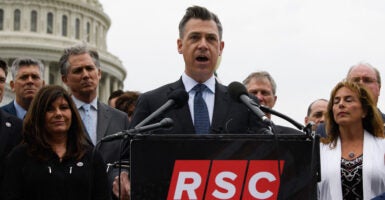 President Joe Biden’s administration has been a “constant crisis” and has confirmed the suspicion of many Americans that he is “incompetent” and “unfit” for office, Republican Study Committee Chairman Jim Banks said Tuesday.

The Indiana congressman cited the escalating crises at the southern border and in Afghanistan as needing oversight hearings in Congress, but he said that wouldn’t likely happen under the current Democratic majorities in the House and Senate.

“It seems this administration is a constant crisis, and it seems like every day they create a new crisis,” Banks said in an interview with The Daily Signal shortly after a press briefing by the Republican Study Committee, the House caucus of fiscal conservatives. “It’s a fundamental constitutional role of the Congress to provide oversight. Obviously, the Democrats aren’t interested in providing oversight … of their own president.”

Banks cited the new Des Moines Register/Mediacom Iowa poll that showed Biden had a 62% disapproval rating in that state.

“Look at the poll that came out yesterday in Iowa. The president’s numbers are in free fall,” Banks said.

It’s because Afghanistan proved what we all thought. Now we know it. This president is incompetent.

A separate Harvard CAPS-Harris poll this week showed that Biden trails former President Donald Trump in favorability. The president is at 46% to Trump’s 48%.

Banks suggested even Democrats in Congress might feel compelled to act to address Biden’s unfitness and unpopularity.

“They see the same polling we do,” Banks said of Democrats in Congress. “This president is wildly unpopular, and his poll numbers are dropping more and more every single day. At some point, they will decide they have to address that. What does that look like? I don’t know.”

After taking office, Biden reversed most of the border security measures of the Trump administration through executive actions. Since that time, a flood of illegal immigrants has poured across the southern border. Last week, an unexpected surge of Haitian migrants illegally entered the country.

Biden’s withdrawal from Afghanistan also has been criticized widely, both at home and by the international community. The Biden administration estimates at least 100 Americans were left behind in the south-central Asian nation, as were tens of billions of dollars’ worth of military equipment.

“The way he handled Afghanistan is a historic blunder that’s going to haunt America for generations to come,” Banks continued. “What’s going on at the border is a significant crisis that has ramifications for our country permanently. So, the president should be held accountable for it. It shows a lack of competence, especially on those issues.”