FBI Agents Were Told Not to Look Into Hunter Biden’s Laptop, Whistleblowers Say 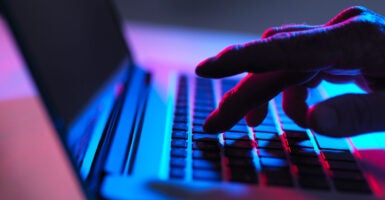 During an investigation, FBI officials instructed agents not to further examine Hunter Biden's laptop prior to the 2020 election. (Photo Illustration: Andrew Brookes/Getty Images)

FBI officials obstructed the investigation into Hunter Biden’s laptop prior to the 2020 election by instructing agents not to further examine the laptop, whistleblowers purportedly told Sen. Ron Johnson, R-Wis.

Federal authorities took the laptop from a Delaware computer repair shop in December 2019 after being alerted to its presence by the store owner. However, whistleblowers said local FBI leadership told employees not to look at the laptop for months and declared the FBI would not further change the election outcome, according to a letter Johnson sent Justice Department Inspector General Michael Horowitz Tuesday.

“These whistleblowers stated that local FBI leadership told employees, ‘you will not look at that Hunter Biden laptop’ and that the FBI is ‘not going to change the outcome of the election again,” Johnson wrote. “Further, these whistleblowers allege that the FBI did not begin to examine the contents of Hunter Biden’s laptop until after the 2020 presidential election—potentially a year after the FBI obtained the laptop.”

Johnson recounted asking the FBI in October 2020 what it had done after obtaining the laptop.

“The FBI failed to respond to my questions and I led the call for you to examine whether the FBI took appropriate and necessary investigative steps after receiving Hunter Biden’s laptop,” he said. “Four months later, in February 2021, you informed me that your office would not take any actions that could interfere with an ongoing investigation.”

Johnson argued the whistleblowers’ claims “provide even more evidence of FBI corruption and renew calls for you to take immediate steps to investigate the FBI’s actions regarding the laptop.”

The New York Post published a report weeks before the 2020 presidential election about the emails from the laptop that showed Hunter Biden’s foreign business dealings with Ukrainian energy company Burisma, where he was part of the board of directors. Former President Donald Trump’s then-lawyer Rudy Giuliani had given the outlet information about the computer’s hard drive.

The FBI did not immediately respond to the Daily Caller News Foundation’s request for comment.