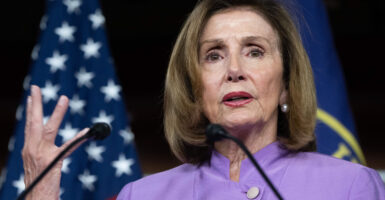 House Speaker Nancy Pelosi—seen here Wednesday at a press conference on Capitol Hill—will have to strongarm a handful of reluctant House Democrats to vote Friday for the Senate-passed Inflation Reduction Act to get it passed over the unanimous opposition of House Republicans. (Photo: Saul Loeb/AFP/Getty Images)

Masquerading as the “Inflation Reduction Act,” the bill passed Sunday by the Senate is nothing more than a Trojan horse for more of the same policies that created the stagflationary fire consuming the economy in the first place.

Zealous federal commitment to central planning led to these economic conditions. Having time and time again championed these policies after each unmitigated failure, President Joe Biden is yet again peddling another reckless round of central planning with your family in the crosshairs.

The bill provides an $80 billion slush fund for the IRS to raise an army of 87,000 more agents. The unwarranted, unconstitutional, and autocratic FBI raid on former President Donald Trump’s Florida home on Monday lays bare for all the world to see the true purpose of this provision.

This near-doubling of the size of the IRS is being presented as merely a way to increase enforcement activities. In reality, it would mean costly audits for Americans from all walks of life, further political targeting, and federal nitpicking over every operation done by small businesses.

Far from targeting tax cheats, most audits by the IRS are of people who cannot afford the legal costs of fighting them, which often run into the thousands of dollars.

This is a naked attempt to weaponize the IRS against the American people to further the left’s agenda and shake them down for whatever the bureaucrats can grab.

2. Doubling Down on Recession

The Inflation Reduction Act would likely result in 900,000 fewer jobs, reduce average household income by $1,200, and result in higher rates of inflation.

With dramatic tax hikes falling on workers and job creators, increased regulations, federal manipulation of the market, and increased deficits, how could this bill not harm the economy?

This bill likely would increase federal inflationary deficits by at least $350 billion over the next decade. It would generate $110 billion in underlying deficits and interest costs and $240 billion in economic harm-related deficits and net interest costs, using Congressional Budget Office rules of thumb. These deficits would need to eventually be paid back through either new taxes or more inflationary creation of money by the Federal Reserve.

In the current economic climate, these deficits would result in even more inflationary pressures. The market would anticipate more of the past two years; namely, the government printing money to quietly impose an inflation tax to fund its endless projects.

4. Hiking Taxes for All

Despite the absurdity of raising taxes during a recession, that’s exactly what this bill would do. Overall, it would increase taxes by $570 billion, or $4,500 per household.

At least $136 billion of those taxes would fall ultimately on low- and middle-income families. The average middle-income household would see a tax burden of more than $2,400 from this bill.

An estimated one-third of the revenue increases would come from aggressive IRS audit activities to pressure mostly low- and middle-income families to settle.

The other two-thirds of the revenue increases would come through increased taxes on businesses. However, businesses can’t pay taxes; they can only redirect the burdens.

Those burdens would be felt through reduced paychecks and job opportunities, slower economic growth, and increased consumer prices. In essence, the government would take more of your money directly so it can shield itself from the inflation it caused.

Nearly half of the new business taxes would fall on U.S. manufacturers, driving them overseas to countries such as China. These tax hikes would work to destroy the U.S. industrial base and sap future growth.

The corporate minimum tax included in the bill would directly penalize investments made in expanding operations and building new facilities. The stock-buyback tax would trap capital with established and less dynamic companies, preventing those funds from being reinvested in innovative and dynamic ventures.

These destructive effects would be compounded by the bill’s assault on American energy production.

The bill would increase by roughly 50% the fees imposed on domestic oil producers on federal lands. It would send $369 billion of your money to politically connected green industries to shift trillions upon trillions of investment dollars into green boondoggles.

Congressional Democrats claim this would reduce greenhouse gas emissions by 40% and save the climate—but with no proof, just rhetoric.

Doing so would accomplish nothing environmentally, no matter what one thinks about global warming. Even if the U.S. immediately cut 100% of its greenhouse gas emissions overnight, it would result, perhaps, in 0.2 of a degree of global cooling by the end of the century.

The bill would likely increase taxpayer costs by $248 billion over the next decade, and contribute to higher insurance prices, all at your expense through more Obamacare subsidies.

Further, the bill would ensure that while the government gets a deal on drug prices, you won’t. This mandate would do nothing to reduce the real costs associated with producing medicine.

The costs would instead be passed on to everyone else through increased drug prices, reduced drug production, and slashed research budgets to produce new lifesaving drugs.

In sum, the misnamed Inflation Reduction Act strikes at rich and poor alike and would adversely affect every American family. The bill, coated in a thin veneer of cheap political rhetoric, represents a blind commitment to the failed policies under which we all now suffer.

There is, however, a right way to reduce inflation; namely, cut federal regulation, taxation, and spending. Reducing the burdens of government would allow Americans more control over their own money and would facilitate the dynamic engines of our economy to prosper once more.