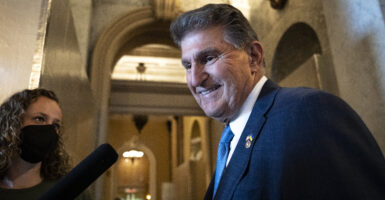 Pulling an all-night “vote-a-rama” Saturday that extended through the middle of the afternoon on Sunday, Senate Democrats defeated a slew of Republican amendments en route to passing a massive spending and taxing bill.

In her role as president of the Senate, Vice President Kamala Harris cast the tie-breaking vote on the bill, dubbed the Inflation Reduction Act, for a final tally of 51-50 along straight party lines at 3:18 p.m. Sunday. The vote-a-rama had begun just after 7:30 p.m. Saturday.

The Democrats’ 755-page bill increases green energy subsidies, expands the IRS, and enacts other initiatives long sought by the left, and authorizes $430 billion in new spending. That’s supposed to be offset by $740 billion in new revenues from tax hikes and increased enforcement that includes the hiring of 87,000 additional IRS agents to conduct audits and seek tax liens.

Before the final vote, Senate Majority Leader Chuck Schumer, D-N.Y., called the bill “one of the defining legislative feats of the 21st century.”

“Our bill reduces inflation, lowers costs, creates millions of good-paying jobs, and is the boldest climate package in U.S. history,” Schumer said. “This bill will kick-start the era of affordable clean energy in America. It’s a game changer. It’s a turning point. And it’s been a long time coming. To Americans who have lost faith that Congress can do big things, this bill is for you.”

Amid passage of the Inflation Reduction Act, year-over-year inflation stands at 9.1%, with the typical employee’s real wages dropping by almost $3,400. Despite the legislation’s title, an analysis of it by the Wharton School at the University of Pennsylvania found the legislation would slightly increase inflation in the near term.

In some cases, Democrats–who hold a functional Senate  majority despite the 50-50 partisan split in the chamber–even changed rules for individual amendments to prevent their adoption despite winning over some Democrats from centrist a conservative states. Most amendments, however, died on party-line votes

Sen. Ted Cruz, R-Texas, introduced an amendment to strike the bill’s $80 billion to increase enforcement by the IRS. It was defeated on a party-line vote.

Cruz added he would prefer to abolish the IRS.

“But at a minimum, we shouldn’t make the IRS larger than the Pentagon, the State Department, the FBI, and the Border Patrol all combined,” Cruz said. “That’s what the Democrats are proposing here. It is a terrible idea.”

Sen. Michael Crapo, R-Idaho, offered an unsuccessful amendment that would have prohibited the IRS from using the $80 billion in new funding to audit taxpayers earning less than $400,000 a year.

That came as Senate Democrats and President Joe Biden have claimed that their bill would not raise taxes on anyone earning less than $400,000 per year.

The Senate did vote 57-43 in favor of an amendment by Sen. John Thune, R-S.D., aimed at reducing the 15% corporate minimum tax on private equity firms.

On the energy front, the bill will limit sales of oil and natural gas leases on federal lands. Sen. John Barrasso, R-Wyo., proposed a measure that would have required the Bureau of Land Management to hold oil and gas lease sales in every state where the sales were held in June. The measure was defeated.

“Instead of pleading with dictators in other countries to increase oil and gas production, we should expand American production,” the Wyoming lawmaker said.

Sen. John Kennedy, R-La., proposed allowing oil and gas lease sales in the Gulf of Mexico and in Alaska’s Cook Inlet. It was also rejected on a party-line vote.

Sen. Richard Shelby, R-Ala., offered an amendment to require the Interior Department to complete all pending coal leasing processes that were paused at the Bureau of Land Management. It, too, was defeated.

Democrats expedited the legislation via a Senate procedure known as reconciliation, in which only a simple majority of 51 votes, rather than the usual 60, is required to move a bill forward. To do so, the provisions must be determined by the Senate parliamentarian to be spending matters, not policy issues.

However, Democrats waived that rule for a few amendments, requiring 60 votes instead of 51. That allowed certain Democratic senators from battleground states to vote with Republicans, but still avoid the risk of adding a popular amendment to the overall bill.

Cruz drew bipartisan support for an amendment to ban the sale of U.S. oil from the U.S. Strategic Petroleum Reserve to China. The Cruz amendment gained a bipartisan majority, but still fell short of the 60-vote threshold to pass.

Some Democrats also voted for an unsuccessful amendment from Sen. Lindsey Graham, R-S.C., to eliminate a tax on domestic and imported oil.

That procedural change allowed Democratic Sens. Mark Kelly of Arizona, Catherine Cortez Masto of Nevada, Raphael Warnock of Georgia, and Maggie Hassan of New Hampshire to back Graham’s measure. Sen. Jon Ossoff of Georgia joined them in backing the Cruz amendment to ban the oil sales to China.

Sen. James Lankford, R-Okla., proposed an amendment regarding the COVID-19 pandemic policy, Title 42, to close the southern border from asylum claims. The Biden administration has sought to lift the Title 42 policy, which prevents asylum claims during a national health emergency.

The Lankford amendment allocated   for the Centers for Disease Control and Prevention to enforce Title 42 until 120 days after the termination of the COVID-19 public health emergency. That, too, was defeated 50-50.

“It’s nonsensical to say we have a COVID health emergency everywhere but our southern border,” Lankford said on the Senate floor. “If there is a public health emergency in this country, then Title 42 must remain in place. Title 42 is the last line of defense our Border Patrol agents have to protect our nation.”

After Lankford’s Title 42 amendment failed, Sen. Jon Tester, D-Mont., offered his own proposal that would have set the timeline at 60 days, rather than 120. Democrats Warnock, Hassan, Cortez Masto, and Kelly, along with Kyrsten Sinema of Arizona, voted for the Tester amendment—as did Republicans. But, with only 56 votes, it failed to reach the needed 60 to be added to the bill.

The 48 Democratic senators and two nominal independents, Angus King of Maine and Bernie Sanders of Vermont, who caucus with Democrats held firm against GOP proposals.

But there was some bipartisanship of sorts, as almost every senator on both sides of the aisle voted against amendments from Sanders.

The Vermonter began the debate by saying that the “so-called Inflation Reduction Act,” according to most estimates, “will have a minimal impact on inflation.”

Senators voted 98-1 to reject Sanders’ proposed amendment to spend an additional $30 billion for climate programs, such as a Civilian Climate Corps.

Lawmakers voted 99-1 to kill a Sanders amendment to ensure Medicare doesn’t pay more than the Department of Veterans Affairs for prescription drugs, and 97-3 to defeat a provision that would have expanded Medicare to cover hearing, dental, and vision benefits. On the latter, Warnock and Ossoff voted with Sanders.

In arguing for another amendment to raise taxes on corporations to pay for a new tax credit, Sanders said, “This is the wealthiest nation on earth. We should not have the highest rate of childhood poverty of almost any country.”

At that point, Democratic senators began to express frustration. Sen. Sherrod Brown, D-Ohio, said he agreed with Sanders in principle, but added,  “I ask my colleagues to vote ‘no’ because this will bring the bill down.”

Brown replied, “We know that this is a fragile arrangement, and we’ve got to pass it.”

Sen. Michael Bennet, D-Colo., agreed with Brown: “We could lose the underlying bill.”

The Sanders child tax-credit amendment lost on a 99-to-1 vote.

Sen. Marco Rubio, R-Fla., proposed a measure that would require federal pregnancy programs to provide aid to biological women only.

“The only thing I am trying to do is make sure, since every pregnancy that has ever existed has been in a biological female, that our federal laws reflect that and that our pregnancy programs are available to the only people who are capable of getting pregnant, biological females. It’s simple,” the Florida lawmaker said.

The proposal came as some federal agencies have bowed to pressure from the LGBTQ lobby to refer to “pregnant people.” The Rubio proposal was killed on a 50-50 vote.

The pending legislation includes a provision allowing Medicare to negotiate the cost of prescription drugs. Critics contend that will lead to price-fixing and shortages of needed drugs.

Sen. Roger Marshall, R-Kan., proposed an amendment to exclude drugs that receive “breakthrough” designation from the Food and Drug Administration from price negotiation under  Medicare. It was defeated.